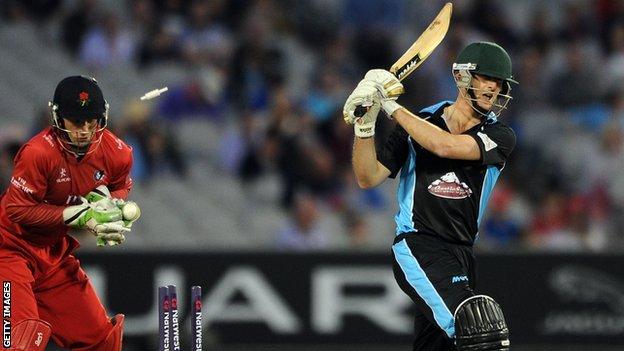 Shropshire skipper Richard Oliver has been handed a pathway into professional cricket after taking advantage of an unexpected opening with Worcestershire.

The 24-year-old former Whitchurch and Shifnal opener, now playing club cricket in Surrey, was just another Minor Counties player a week ago.

But a successful T20 Blast call-up by Worcestershire got the man from Woore noticed, with knocks of 43 and 34.

"I've got a chance, one that a lot of people don't get," he told BBC Sport.

"I'm not on a contract yet. But I'd like to think I've done enough to stay in the squad."

Oliver's introduction into county Twenty20 cricket, with just an hour's notice, came when he was selected to play for Worcestershire against Durham at Chester-le-Street on Friday night, hitting eight boundaries in a nerveless 43 in 31 balls.

The following night, he impressed on another big stage, with 34 off 24 balls against Lancashire, including two big sixes, the first off Junaid Khan, the second off England's all-time top wicket taker Jimmy Anderson.

Oliver learned a colourful new phrase or two in the process, which he admits "you wouldn't say it in front of your mother".

But he also says: "It's just part and parcel of the game. All you're doing is watching the ball. Like in darts, you play the board not the player.

"Five years ago, I could never have imagined that I would be sharing the same cricket field as Jimmy Anderson. It's something I would never have dreamed about even six weeks ago. But, although it's a real privilege, playing with those guys is no different to playing with anyone from Shropshire, or Reigate.

"We're all human beings. They're like anyone else who make mistakes one day and have the ability to do well the next. And they're all lovely blokes too."

"He's registered with us on a match-by-match basis at the moment," Worcestershire director of cricket Steve Rhodes told BBC Hereford & Worcester. "And the ball is in his court.

"He sees this as a fantastic opportunity to impress and, at the end of the day, what he wants is a contract.

"He hits the ball in some funny areas, he's got a very good eye, and can hit it some distance as Junaid Khan and Jimmy Anderson found out.

"We gave him the opportunity to impress in the second XI and he got two hundreds in two days and then had another on the Sunday for Shropshire.

"At the moment, if we play him in certain games, be it first team or second XI, we have a structure where we pay him. And the way he has played, hopefully he is going to have a few more appearances.

Richard Oliver is not a guy who is lacking any cricket nous. He actually looks at home in that environment

"It is early days and we don't want to put too much pressure on him. But he is not a guy who is lacking any cricket nous. He is not a duck out of water. He actually looks at home in that environment."

Although Oliver was already on Worcestershire's radar, having played a second XI game at the end of last season, it was Shropshire coach Kevin Sharp's eve-of-season move to New Road to supplement the backroom team at New Road which finally opened the door.

"I'd moved all my stuff down to Reigate to start a new job," Oliver told BBC Radio Shropshire. "Then, on the Sunday night, Kevin Sharp rang to say they had an injury and would I come up and play for the seconds?

"I got a few runs. And the upside of doing well for Worcestershire was that it gave me the confidence to go out and play with freedom for Shropshire and I got 148 against Lincolnshire, which wouldn't have done me any harm at all.

"Sharpy and me share the same winning culture. It has been nice to walk straight back into that relationship and it has been easy fitting into the Worcester dressing room. A smooth transition."

The added workload has come with one slight handicap though.

"I've had two days off in three weeks," said Oliver. "And they've been spent either travelling or washing my whites. All my kit is in my car boot. But I'm not complaining. I'm just excited at getting this big chance."