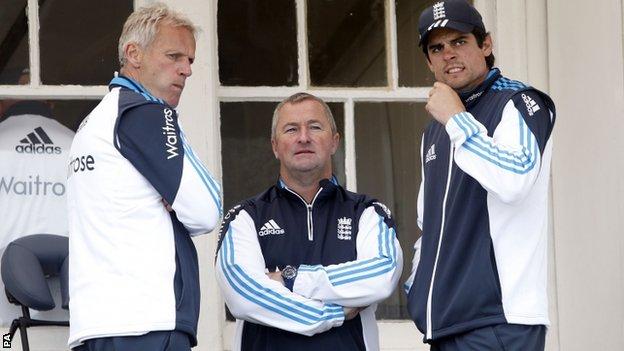 "Paul's knowledge of Sri Lanka and cricket in general is high," said Morgan, who will lead England in a T20 international at The Oval on Tuesday.

"He has a great cricket brain. He has been key in our preparations."

Farbrace, a 46-year-old former Kent wicketkeeper, has previously had spells as coach of the England women's team and Kent.

He took charge of Sri Lanka in January, leading them to the Asia Cup and then the World T20 in Bangladesh, their first major trophy since the 1996 World Cup after a run of four successive final defeats.

"He absolutely loves and cherishes the game," added Morgan, who is standing in for injured T20 skipper Stuart Broad.

England are looking to recover from a dismal winter in which they suffered a 5-0 Ashes whitewash by Australia and were knocked out of the World Twenty20 in the group stage.

Morgan sees Tuesday's match as a chance for the team to put the winter's failings behind them and set the tone for a successful summer.

"To repay a little bit of what happened in the winter, I think a win would go a long way tomorrow and start off our season properly," he said.

"There's a huge opportunity for individuals right down, both batting and bowling, as well as collectively as a unit.

"If somebody puts in a match-winning performance against a side we're going to be playing the first half of our season against, it's going to go a long way."

Meanwhile, Morgan said he was shocked by recent revelations of corruption within the game.

Former New Zealand international Lou Vincent has given evidence to the International Cricket Council's Anti Corruption Unit (ACSU) claiming that at least 12 games he played in around the world involved some sort of match or spot fixing.

"It does concern me," said Morgan. "It is astonishing to hear that it still goes on because as a player you are taught from a very young age all the things you need to look out for.

"But everybody knows where the line stands - just say no to corruption."