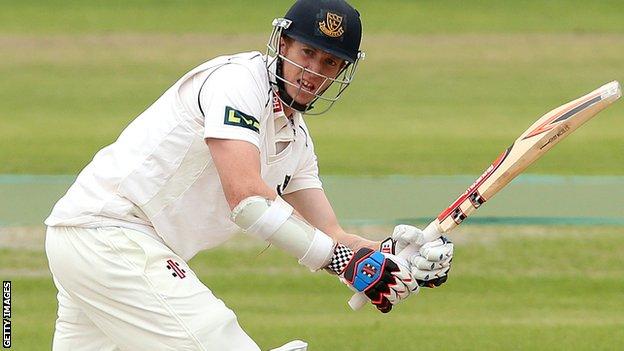 Luke Wells has established himself in Sussex's County Championship side but is hungry for more.

The 23-year-old batsman has set himself two goals; scoring 1,000 first-class runs for the first time in his career and breaking into the county's one-day team.

Wells came close to his first target last season, when he scored 982 Championship runs at an average of 37.76, but he is eager to keep improving.

"I expect a lot from myself because I believe I am a good enough player to deliver bigger and better results," he told BBC Sport.

"Although I have done reasonably well over the last three years I don't feel I have done as well as I could have or should have done.

Statistics correct at 31 May

"I feel my average isn't as high as it should be and that I should have hit 1,000 runs by now.

"You'd rather be expecting more than be satisfied with average results. Moving forward you always have to have the will to improve and exceed expectations.

"I don't put pressure on myself. I just see it as a challenge."

The left-hander believes he should have reached the 1,000-run milestone in 2013.

"If I didn't give away a couple of innings I would have got there," he said.

"I spent my winter in Sydney and definitely improved. I feel I've opened up a few areas through the offside I may not have had previously and am targeting about 1,100 or 1,200 runs.

"The only difference is when you are in and on 40, that you give it away. If you convert those into slightly higher scores, when then there is no reason why you should get out, then I will be at 1,200 runs.

"I feel I am a better player now and I have the mental concentration and the defensive technique to do it."

Ahead of the current match against Nottinghamshire at Hove, Wells had scored 221 runs in his five Championship appearances this season - with his high score of 79 not out coming against Somerset in April.

He admits he is "a fair way" off his target but is keen to contribute to Sussex's title challenge, with the Hove side currently fifth in the Division One table.

I am targeting about 1,100 or 1,200 runs. I feel I am a better player now and I have the mental concentration and the defensive technique to do it

"I feel in really good nick at the moment and that there's a big three-figure score just around the corner," he said.

"I know if I keep doing the same things and backing myself I'll score a good amount of runs.

"We have got a strong squad and one hallmark of this season so far is competition for batting spaces. Everyone is under pressure as you know you need to get your runs.

"That is the way it should be in any squad. You shouldn't be able to rest on your laurels as people around you want to take your spot."

The former England Under-19 international, who is the son of former Sussex captain and one-time England Test player Alan, believes his time in Australia has improved his all-round game.

"I had a clear basic goal which was to work on a couple of technical areas to do with my trigger and my stance to be in a better position so that I can move more freely and make me more dynamic at the crease," he said.

"I feel I am a lot quicker on my feet, which will help in all formats of my game. I've worked on shots through the off-side, my one-day skills in general and my fitness."

Wells, meanwhile, describes his efforts to break into Sussex's one-day side as "difficult and frustrating".

The Eastbourne-born player has only made one competitive Twenty20 appearance for the club, coming against Glamorgan in 2011, and has made just a handful of appearances in List A competition.

Sussex have performed strongly in both Twenty20 and 40-over competition in recent years, but made group-stage exits in both formats in 2013.

Wells says the county calendar has not helped his cause but hopes the new schedule, which sees the T20 Blast played throughout the season and the new 50-over One Day Cup played in July and August, could benefit him.

"So far in my career I've started well in four-day competition then T20 comes along, I have a big break in the middle of my season and I try to find a way to keep the momentum going," he said.

"It has been quite hard work. I think this year with the Friday nights will help.

"I've been pushing as hard as I can and have been working a lot on my one-day skills. I can strike a ball as far as anyone in the squad.

"It is just about putting it all together into performances in the middle.

"It is hard with the schedule in and around four-day cricket to find time to play second XI T20 games.

"You need your currency, as it were, to show the coaches that you can do it."

Wells did play five CB40 matches for Sussex last season but only managed to make seven runs in four innings.

"Unfortunately last year I did get a run at the top of the order but I got out," he said.

"They were classic dismissals - a caught behind and a couple of lbws - but that's the way it goes. That is suddenly four games and you haven't scored a run.

"I feel I am in a good place with my game and am offering other skills, not just with my batting. I am determined to get in the side.

"Every year we always push quite hard in one-day competitions and have had quite a lot of success. Last year we didn't have that and I was disappointed to not get a go in a T20 game come the end of the campaign.

"Having said that the team needed its momentum and wanted to go with the same guys, which is absolutely understandable.

"All I can do is put myself in the best possible position that when I do get a chance, to take it."