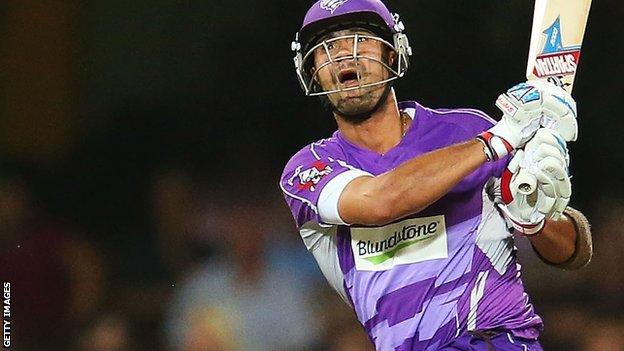 Shah, 35, who played six Test matches for England, retired from four-day cricket with Essex last year to concentrate on the limited-overs game.

Having committed to playing three T20 matches, he will make his Hampshire debut against Sussex at Hove on Friday.

In 198 Twenty20 matches, playing for sides including Cape Cobras, Delhi Daredevils, Dhaka Gladiators, Hobart Hurricanes, Kochi Tuskers, Kolkata Knight Riders, and Rajasthan Royals, he has scored 4,863 runs at 33.77 with a strike-rate of 126.37

Shah, who White had hoped to sign before the start of the season, comes in as cover as Michael Carberry is away with England's limited-overs squad, Liam Dawson is out injured and Australian Glenn Maxwell is still playing in the Indian Premier League with Kings XI Punjab.

"We will keep it open," said White. "But certainly these three games, with those players missing, he comes into the middle order and gives us the experience we are looking for.

"He's someone we had spoken to during the winter and with Neil McKenzie not coming back this year, he's certainly been on our radar.

"It's another opportunity for Owais to prove what a good player he is in this format."

He spent 14 years at Middlesex before joining Essex in 2010, averaging 37.69 in Championship matches in his time at Chelmsford.

The right-handed batsman, who will play for Hampshire's second XI in preparation for his T20 Blast return on Friday, featured alongside former Hampshire T20 captain Dimi Mascarenhas for the Hobart Hurricanes in the 2013-14 Australian Big Bash.

"I'd like to think I can offer some experience to the team and get some runs along the way," said Shah. "I know they've got a very good formula here, but I just want to fit into the team, find out my role and then play to the best of my ability."