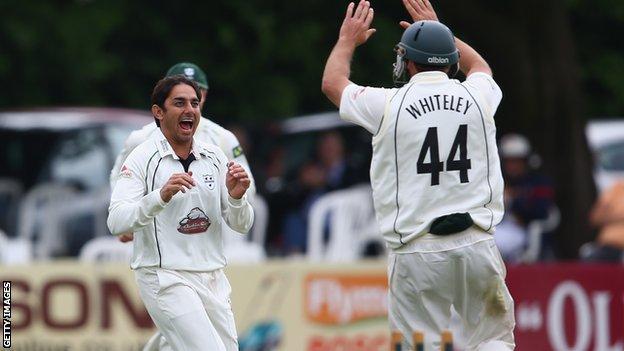 Saeed Ajmal starred as Worcestershire beat Essex by 72 runs with a day to spare to go back top of Division Two.

The Pakistan Test spinner took 7-19, for match figures of 13-94, the best in the County Championship this season, Jack Shantry weighing in with 3-55.

Worcestershire added just 12 to their overnight score to be bowled out for 120, Monty Panesar finishing with 5-23.

Seamer Shantry struck three times before lunch, removing openers Mark Pettini and Tom Westley, before having Jaik Mickleburgh taken in a second legside stumping of the match for Ben Cox.

Ajmal then got in on the act, bowling Greg Smith before claiming the key wicket of New Zealander Jesse Ryder, who was lbw for 20.

Two more followed when he bowled James Foster the got the bonus wicket of Graham Napier, whose edge to slip flew up off skipper Daryl Mitchell's boot to be snared by Ross Whiteley at short leg.

Matt Salisbury (19) and Foakes held up the home side, bringing the victory target down to less than 100 when they added 50 for the eighth wicket, by some way the biggest partnership of the innings.

Only one other bowler has claimed a match haul of 10 wickets or more so far this summer, Lancashire's England fast bowler Jimmy Anderson, who claimed figures of 10-89 against Northants in April.

But the end came swiftly as Ajmal won another leg-before decision against Salisbury, then dismissed Foakes in similar fashion before Panesar went first ball, spooning a return catch with his next delivery - his 500th first-class wicket.

That completed a third straight home Championship win for Worcestershire this season - their fourth in a row at New Road, having also won the final home game of last season against Northants.

"It was a strange game. It was almost like neither side wanted to win with the way they batted. Our batting is a concern definitely. We knew we would be light on batting, with no Moeen Ali, or Alex Hales. But only Daryl Mitchell stood up again, although Ben Cox played well in the first innings.

"I'm delighted for Daryl in particular, but for Saeed to bowl as well as he did was a monumental effort. There was a bit of turn from the footholds for Monty Panesar which made it awkward because he is a very accurate bowler but Saeed has got eight different deliveries.

"He maximises them and bowls them all and if there is not a lot of turn he bowls his fast stuff and, when they start jabbing at it, he bowls his slow doosras. Playing against him is extremely difficult. He doesn't necessarily want it turning square but he is just a real magician. He showed his international class in winning the game for us."