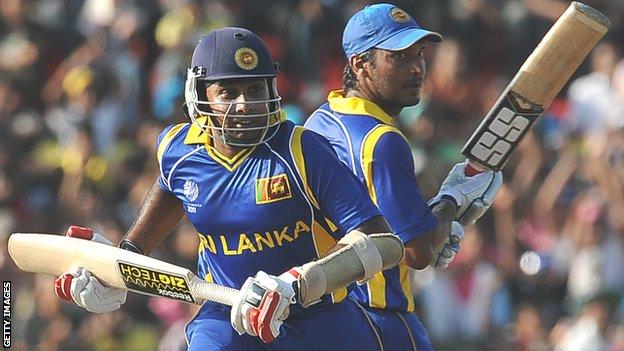 Mahela Jayawardene was only 12 years old when a team-mate lost both his parents in a bomb attack at a bus stop in Colombo.

"I remember him finishing the funeral and everything else and playing a game of cricket two or three weeks later," the Sri Lanka batsman recalls.

"That's how we were brought up. The right thing to do was just get your head down and get on with it.

"We went to school every day not knowing whether we would come back because there were bombs going off every other week. We were always thankful that we were alive."

For Jayawardene and his close friend Kumar Sangakkara, cricket became an escape from the daily horrors of life in a country torn apart by a civil war that raged from 1983 to 2009.

The glue in Sri Lanka's middle order for more than 15 years, they have gone on to become two of the greatest batsmen in the history of cricket, each scoring more than 10,000 Test runs and setting a record for the highest Test partnership with 624 against South Africa in 2006.

But the 36-year-olds are more than just cricketing greats. They are survivors, statesmen - Sangakkara's MCC lecture about corruption in Sri Lankan cricket in 2011 earned him a standing ovation at Lord's - and beacons of hope for a proud, cricket-mad nation devastated by conflict, poverty and the tsunami of 2004.

On the eve of their final tour of England, Jayawardene and Sangakkara sat down with BBC Radio 5 live to reflect on their remarkable lives, their incredible achievements and the relationship that makes them such a formidable partnership both on and off the cricket field.

Jayawardene and Sangakkara were both six years old when war broke out between Tamil separatists and the Sri Lankan army. Between 80,000 and 100,000 people were killed in a 26-year conflict involving air raids, roadside blasts, suicide bombings, land and sea battles.

Kumar Sangakkara: "When the war broke out my parents took in lots of our friends and family into our house to try to protect them. As a six-year-old it seemed like fun to have lots of friends staying at my house, but what I didn't understand was the risks my parents were taking at the time.

"Now the war is over, the whole country is looking forward to history never repeating itself. I think everyone fully realises the value of peace and what hardship the whole country went through for 30 years to achieve that."

Mahela Jayawardene: "Cricket has always brought the country together. Even during the war, when Sri Lanka won the 1996 World Cup - both sides celebrated and there was a peace for a few days. Now, people living in Sri Lanka want lasting peace. They want to rebuild the country and make a better place for our next generation."

A meeting of minds

Sangakkara and Jayawardene first met as teenaged opponents in a match between their schools Trinity College and Nalana.

KS: "I'd heard of Mahela before because his name was known. He was playing for the college first XI from the age of 14 and was always talked about as a person who will walk into the national side when the time was right."

MJ: "Kumar came quite late to cricket. He came and smashed us and got 100 in that game. When we met we realised there was a really good bond between us, we had similar ideas. But we really started to get to know each other once we started playing for the national team. That's when we started the friendship and it has been great."

With his text-book cover drives right-handed Jayawardene would grace any side. Sangakkara, a left-hander who also kept wicket for long parts of his career, has to work harder to get runs but is a natural cutter and puller of the ball.

KS on MJ: "Mahela is so natural in the way he plays. He is the one cricketer I know who hasn't changed anything since he was 15. His backlift, movement, style, everything has been the same, whereas I have changed and done so many things differently. But he's also very upstanding, forthright and honest.

MJ on KS: "Kumar is much more hard-working than I am. I don't have that much patience but Kumar is very analytical and works really hard at his game. I have learnt a lot from him - we feed off each other very well. It's great to see the commitment and the passion he shows on and off the field. His only flaw is his timekeeping. It is something we have always spoken of - not just me but the entire team. But when he comes in he always gives a good excuse."

Jayawardene and Sangakkara are the fourth most prolific partnership in Test history with 5,989 runs in tandem. In 2006, they put on 624 for the third wicket against a South Africa attack featuring Dale Steyn and Makhaya Ntini to set a new world record for the highest Test stand. So, how do they approach building a partnership?

KS: "At the start we talk cricket, keep each other going through the tough periods and discuss what the bowler is doing. Then, as the innings develops, we have moments where we allow the odd joke to slip in. I enjoy batting with Mahela - the way he plays makes it so much easier to do my thing, because the scoreboard is always ticking over. I'd be trying to play really solid against spin, he'll be down the track lofting a couple, sweeping and reverse sweeping. When the bowler is thinking about him, they sometimes forget about me."

MJ: "We complement each other really well - Kumar being left-handed and me right-handed probably helps. It's tough for the bowlers to get used to us. Kumar is very solid - he knows the ins and out of a bowler so I get a lot of information from him about what the bowler is trying to do. We feed off each other, get into a rhythm and enjoy batting together."

In 2009, armed gunmen attacked a bus carrying the Sri Lankan cricket team on its way to play in the Pakistani city of Lahore. Six policemen escorting the team bus were killed, while Jayawardene and Sangakkara were among seven players who suffered minor injuries.

MJ: "We all thought we were going to die, it was that brutal. We were so lucky to get away from that and survive to tell the story. It's an unfortunate incident and we wish no-one had to go through it, but because we grew up in a war-torn environment it was not a big drama for us. Soon afterwards, we were joking inside the bus about how people reacted, the way some people screamed, got down and were lying on the ground. But at the end of the day you realise how lucky you were."

KS: "Because none of the team died we were able to move on quite quickly. We were in the limelight but lots of people have gone through much tougher things and then moved on with life, so why should we be any different?"

Having endured the heartbreak of defeat in four global limited-overs finals, Sangakkara and Jayawardene finally tasted glory in April when Sangakkara guided his team to a six-wicket victory over India to win the World Twenty20 in Bangladesh.

MJ: "We spoke about what had happened in the past the night before. We were nervous and said if we lose this we will probably have to hang ourselves. But talking about it helped. In the past we haven't executed certain things properly. We knew we had to keep things simple and back ourselves. Everything came right in that final."

KS: "There were times in that tournament when we thought we were in big trouble. Playing New Zealand in the quarter-final with only 119 to defend and against South Africa when they needed fewer than six an over. But different players put their hands up and took responsibility at different times and that worked for us."

Former Kent wicketkeeper Paul Farbrace was Sri Lanka's head coach for the World T20 success. But less than three weeks later, he quit to take up a role as assistant to new England coach Peter Moores.

KS: "I understand the choice Farby made. Whether it was fair [for the England and Wales Cricket Board] to put him in that situation when he was still with us is a different question. It wasn't pleasant, but Farby is a top guy and a fantastic coach. He came back and spoke to the team and everyone understood that from Paul's part it was a tough decision."

MJ: "Paul was with us for three months. This is a team that was being built for longer than that. We were the number one team in T20s which shows for the last two years we have been playing some really good cricket and a lot of credit should go to the other coaches as well. People make choices, there is nothing wrong with that and we have total respect for Farby as a fantastic coach and a fantastic person. But coaches and players come and go - we move on."

In his 2011 Cowdrey lecture, Sangakkara launched a scathing attack on the "partisan cronies" ruining Sri Lankan cricket. He continued his crusade against corruption in response to the recent claims by former New Zealand all-rounder Lou Vincent about the extent of spot-fixing in the game.

KS: "There should be a respectful wage for playing cricket, be it first class, or for your country. That is the first step in combating corruption at a very early stage. It's a huge issue, how much is prevalent at the moment and in the past I'm not sure, but the sport depends on the fan. If they question what they see - a bad shot, a no-ball, a wide, it's disastrous for the game.

"There has to be a concerted effort between everyone - players, administrators, the media, spectators, everyone, to try to stop it. International players, or anyone who signs a contract with a national board, should allow the ACSU (Anti-Corruption and Security Unit), or any other investigative body, to have full access to your financial records. I think that will only serve to protect players much more than it does now."

Jayawardene and Sangakkara both called time on their international Twenty20 careers after the final in Mirpur. But how much longer will they continue to grace the Test and one-day games?

KS: "We'll get through the World Cup in 2015 and that will be it for one-dayers I should think. If we can get through that and achieve something for the team, that would be something special."

MJ: "All formats have been challenging, but Test cricket is the ultimate, it's where you really get pushed and where we have always analysed and set ourselves goals. We want to finish our careers with Test cricket so when that day arrives - I have no idea when - we will assess how we are playing, whether we are enjoying it and then make a call."