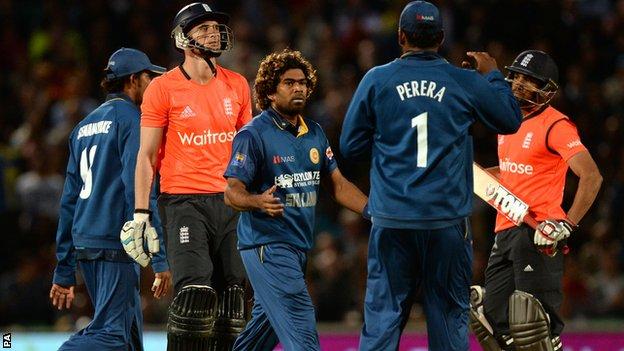 England's home summer campaign began in familiar fashion with a nine-run Twenty20 loss to Sri Lanka at The Oval.

The tourists finished on 183-7, top scorer Thisara Perera making the most of a dropped catch by Michael Carberry to hit 49 from 20 balls.

Alex Hales gave England hope with a fine 66, but the opener had little support from down the order.

"The over from Malinga proved the difference on the night. There was good batting from both sides, but in the penultimate over Chris Jordan went for 22; Malinga went for four runs. Malinga is world-class and he has led his team to a deserved victory."

The hosts had no answer to Lasith Malinga (3-28) and fell short despite Ravi Bopara's (28) late hitting.

The defeat means England have won only six out of 25 international matches in all formats since the beginning of last winter's disastrous Ashes tour.

Carberry's drop, and two other missed chances in the field, did not help their cause, but Malinga's superb fast bowling, where he conceded just four runs in the penultimate over, was crucial.

England looked set to restrict the World T20 champions to a more manageable total when the tourists had lost two wickets before the end of the fourth over, including T20 debutant Harry Gurney claiming his first scalp in international cricket by bowling Tillakaratne Dilshan.

Kithuruwan Vithanage and Lahiru Thirimanne staged a recovery with a partnership of 54 for the third wicket, but England's attack chipped away at the Sri Lanka middle order until Perera was given a life by Carberry.

The Hampshire opener, playing his first T20 international, nearly collided with Morgan as he dropped a steepling chance from Perera, who was on 20 at the time.

Perera took full advantage with some savage hitting, scoring 49 of the 61 runs added while he was at the wicket in the last five overs of the innings.

Morgan rued the mistawwhose hose kes in the field that led to Sri Lanka getting out of reach.

"It's devastating," said the Middlesex left-hander. "In the first 15 overs we bowled really well and fielded okay and then we sort of fell away. There are no excuses here. Perfect fielding conditions and we dropped three. It's inexcusable."

Carberry's miserable debut continued when the left-hander was dismissed for seven at the start of England's second over, but opening partner Hales kept his side in the hunt.

The Nottinghamshire player, whose brilliant hundred helped England beat Sri Lanka in the T20 World Cup, played almost a lone hand in his 41-ball knock until Malinga uprooted his off stump.

Hales's dismissal did not quite end England's lingering hopes, but Malinga's accuracy meant England required 24 from the last over.

Bopara cleared the ropes once and hit the next ball for four, but his efforts were in vain as Sri Lanka clung on to ensure the first home match of Peter Moores's second spell as coach ended in defeat.