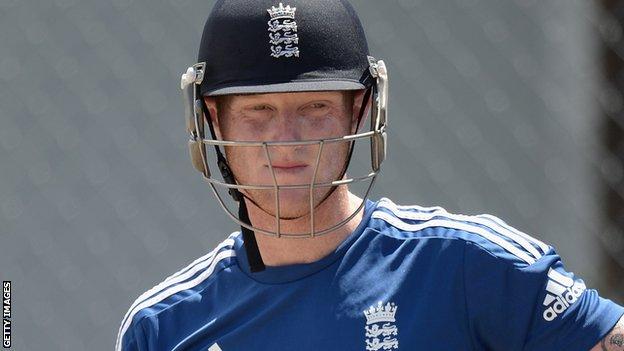 England all-rounder Ben Stokes is close to a return to action with county side Durham after two appearances for the club's second XI.

The 22-year-old has been out with a wrist injury since punching a locker during England's Twenty20 series against West Indies earlier this year.

However, scored of 56 and 47 against Notts and Derbyshire's second teams have raised hopes of a Durham recall.

"In my eyes he is not far off being fit to play," coach Alastair Maiden said.

Defending champions Durham start a County Championship fixture against Nottinghamshire at Trent Bridge on Sunday and Maiden told the club website: "There's no problem batting, no problem fielding and it's just about building his bowling back up, but I can't see any problem with him being available for that game."

Stokes was one of the few pluses from England's winter debacle in Australia, scoring 279 runs, including a maiden Test century, and taking 15 wickets in the 5-0 Ashes series defeat.

He is hoping to prove his fitness in time for the start of England's home series against Sri Lanka on 12 June.

And as well as making two useful T20 scores for Durham's second XI, he also took 2-22 against Notts and 4-23 against Derbyshire.

Maiden was happy with his progress, adding: "He bowled off a shorter run at the start of his spell and then by the end he was bowling off a full run and bowling at a good pace."

However, there was bad news for another England hopeful, Scott Borthwick, who suffered a finger injury in Durham's Championship game against Somerset on Wednesday.

The club tweeted that the injury had been diagnosed as a "small flake fracture" and "large laceration to his fingertip".