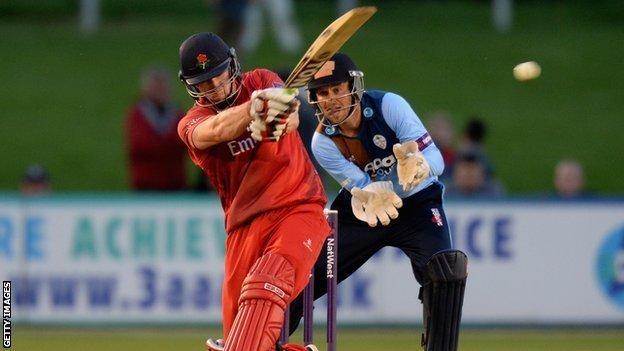 A county record fourth-wicket stand of 131 between Steven Croft and Karl Brown helped Lancashire to a second straight T20 Blast win at Derbyshire by 20 runs.

Steven Croft and Karl Brown's fourth-wicket stand beat the previous highest for Lancashire of 113 between Croft and Mal Loye against Durham at Old Trafford in 2007.

It was the county's second record partnership in six days after Tom Smith and Paul Horton put on 128 for the third wicket against Worcestershire.

Stephen Moore (40) led the way against his former county but when he was run out by Croft their run chase stalled.

Croft and Brown's spectacular partnership was the second T20 record stand for Lancashire inside a week after Tom Smith and Paul Horton shared 128 for the third wicket in last Saturday night's 12-run win over Worcestershire.

Croft's knock came off 52 balls, with six fours and three sixes, while Brown plundered his runs off 50 deliveries, hitting six fours and two sixes, as the home attack suffered.

Victory took Lancashire into a share of the lead of the North Division with Northants.