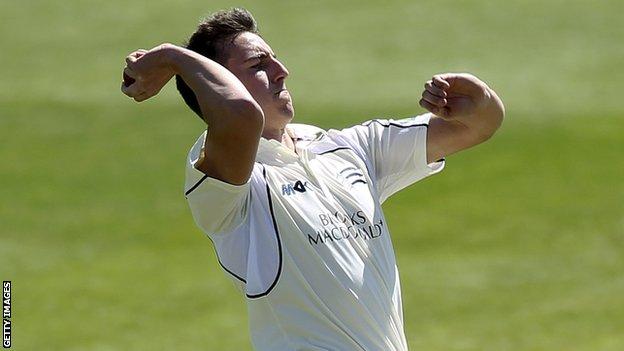 "It is such a hard thing to gauge but the consistency was as good as it has been and I felt like I could make every ball count," he told BBC London 94.9

"Sometimes when things go your way then I suppose it all adds up."

The Middlesex seam bowler set four personal records in the victory over Northants:

Roland-Jones took a career-best 6-55 in Northamptonshire's first innings and then hit 60 runs off 30 deliveries as Middlesex declared on 543-7 in reply.

The seamer then returned with the ball and ended with figures of 6-50 in the second innings as the Lord's outfit won by an innings and 84 runs at Wantage Road.

Last season Roland-Jones played eight County Championship matches, taking 21 wickets at an average of 33.04, and he underwent knee surgery at the end of the campaign.

"There has been some hard work in between and it is nice to feel it is paying off," he said.

"I feel I am contributing to good team performances, which was lacking the year before. It feels great to be back and long may it continue."

Middlesex now sit top of Division One, having won four of their opening six fixtures this year.

Roland-Jones has been left out of the four-day side twice this season and he says competition for places is driving the squad on.

"I found myself on the wrong side of that for two games and it adds to the determination of the group," he said.

"It does create healthy competition and it certainly did encourage me to go away and work hard for the few weeks I was out. I feel it has done me some good.

"We are going to take things game by game as it is a long season. We are delighted with how things have started, particularly after a tricky start in Hove and a hiccup in Birmingham.

"It feels like the away form has now been corrected. The lads are in good form and there is much more to come."