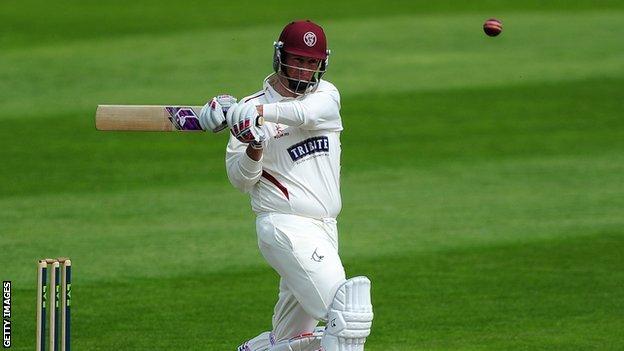 Openers Trescothick and Johann Myburgh (55) began the day 112-0, needing 136 to win, and charged towards the total before their 169-run stand was broken by Ryan Pringle running out Myburgh.

But the adverse conditions subsided, and Alviro Petersen (36no) and James Hildreth (11no) saw Somerset home.

Somerset's first-wicket stand of 164 from Marcus Trescothick and Johann Myburgh is a record for Somerset v Durham. The previous was 119, set in 2010

Defeat leaves Durham, who lost bowlers Jamie Harrison (knee), Mark Wood (side) and Scott Borthwick (finger) to injury at Taunton, without a win in their first five Championship games as they defend their title.

Somerset's win, which was set up by five-fors for bowlers Alfonso Thomas and Craig Overton, had looked in severe doubt when thunder and rain forced the players off the field early in the afternoon, but when they got back out again they finished off the match in under 45 minutes.

Trescothick, whose quickfire century came off 107 balls, had built well with Myburgh, before a mix-up left them at the same end, leaving Pringle an easy run out.

Nick Compton's middle stump then flew from his second ball, but Chris Rushworth had no-balled, shortly before they went in for rain.

The match finally resumed at 15:45 BST and, despite Compton going for a five-ball duck, Petersen and Hildreth saw their side home at a canter.