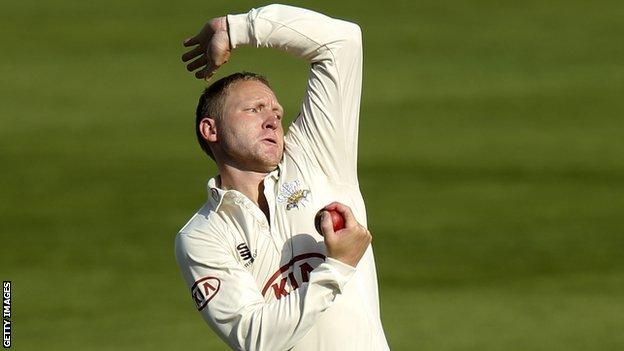 Veteran off-spinner Gareth Batty took a career-best 8-68 to bowl Essex out for 228 before Surrey closed day one 55-3.

The hosts were 77-0 before Batty tore in and grabbed the first eight wickets, including opener Tom Westley for 95.

But two balls after the eighth man was gone, Zafar Ansari spoilt the party by bowling Monty Panesar. The slow left-armer then snared Ben Foakes for 55.

Arun Harinath was unbeaten on 21 at stumps but Graeme Smith's replacement, Hashim Amla, fell for just 11.

Rory Burns (16) and nightwatchman, Chris Tremlett, were the other batsmen to be dismissed as Essex gave themselves a lift late on.

"Late wickets for Essex failed to paper over the gaping cracks in the underbelly of a batting line-up and its weakness against spin for the second successive game.

"A silky 95 from Tom Westley and a dexterous 55 from the promising Ben Foakes apart, Essex struggled as soon as Gareth Batty was introduced into the Surrey attack.

"Possibly scarred by their defeat by Worcestershire, and in particular Saeed Ajmal, in the previous match, Batty took wickets with little sign of pronounceable turn.

"It was a disappointing day for James Foster too. Talked up as a potential solution to England's wicketkeeping problems, he fell for a duck.

"He'll get another chance to stake his claim, but late wickets for Essex suggest it was honours even on day one at Chelmsford."

"Gareth Batty, in his first game of the summer, took the plaudits on the opening day at Chelmsford, using all his experience and clever changes of pace.

"Tom Westley was seemingly playing a different game, making an accomplished 95 and Ben Foakes played well until he was the last man out.

"Batty bowled beautifully and his efforts seemingly put Surrey in a commanding position as the hosts were all out for 228.

"But Essex came back fighting as Tom Moore claimed his maiden first-class wicket and Tanveer Sakindar bowled Hashim Amla for 11 off the inside edge.

"Nightwatchman Chris Tremlett followed to even up a fascinating day as Surrey closed on 55-3."