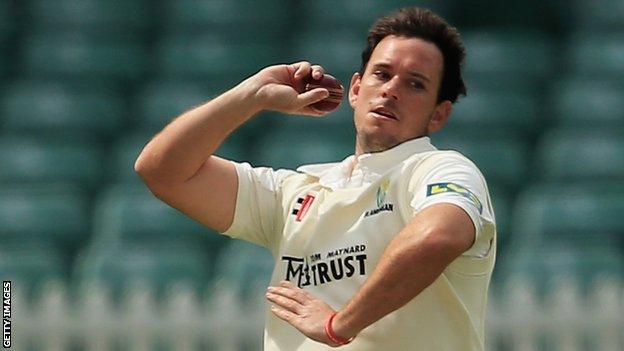 Leicestershire were skittled for just 109 as Glamorgan's bowlers put their side in control on a rain-affected day.

Michael Hogan (2-30) bowled Greg Smith with his second ball, then the visitors soon collapsed to 34-5 when Ramnaresh Sarwan edged Jim Allenby (3-20) behind.

Jacques Rudolph (26 no) and Will Bragg (5 no) then helped Glamorgan to 56-1 before rain brought an early close.

Leicestershire's batting frailties, exposed in last week's heavy defeat at Hampshire when they were bowled out for just 96 in their second innings, were highlighted once again as Niall O'Brien and Anthony Ireland top scored with just 17.

Tom Lancefield fell late on for the home side when he nicked Rob Taylor to the wicketkeeper for 19 .

"A green wicket made this a very important toss to win, and the fact Leicestershire lost it for the fifth time in five championship matches this season put them on the back foot from the start.

"The Glamorgan bowlers, led by Michael Hogan, duly made the most of the conditions, but while some of the Leicestershire batsmen were beaten by movement, others, including Josh Cobb and Niall O'Brien, played a significant part in their own downfall.

"It was hard not to believe there was something of a hangover from the last time the side batted in the Championship, when they were dismissed for 96 by Hampshire.

"The solidity with which Tom Lancefield and Jacques Rudolph played in putting on 43 for the first-wicket when Glamorgan began their reply put the Leicestershire innings in some sort of context, and the visitors are already very much up against it in this match."