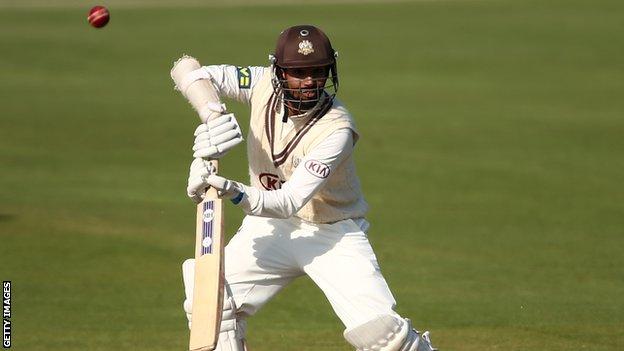 On a slow-scoring day at Chelmsford, Essex fought back from making just 228 on day one by reducing Surrey to 204-6.

Having resumed on 55-3, Arun Harinath (63) and Zafar Ansari (39) pushed the score on to 116 before the latter was caught and bowled by Tom Westley.

Harinath, who took a painful 231 balls for his runs, knicked to slip before Jason Roy opted for a tact change by quickly hitting a six and two fours.

"Day Two was one for the cricket connoisseurs as Essex's spinners tried to grind down the Surrey batsmen's resolve.

"For long periods they resisted, but patience and pressure paid off with Essex claiming three wickets on a flat, slow wicket.

"Inventive fields and athletic fielding kept runs to a minimum, which meant when wickets fell Essex would always be in the game.

"The side that shows the most patience will likely end up the winners of this contest, providing the weather forecast improves over the next two days."

"He laid the cement to the foundations of their reply and alongside Zafar Ansari guided Surrey through a tricky morning session.

"But Harinath fell after lunch before Steven Davies played patiently to move the visitors within 24 runs of Essex's effort when the rain arrived.

"Surrey know any sort of lead will be crucial in this game but the weather gods are not looking in a good mood for the final two days of this game."