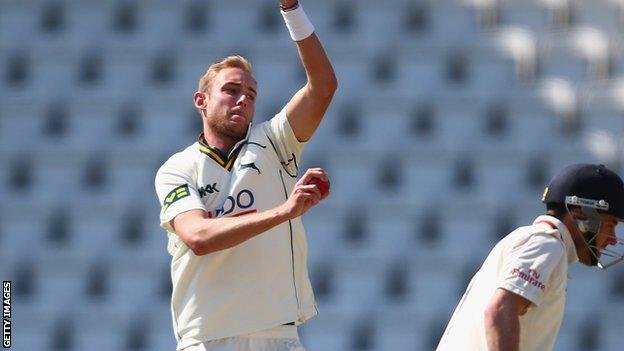 England bowler Stuart Broad returned from injury for Nottinghamshire on a rain-affected second day with Durham.

Broad, who has not played since March with a knee problem, finished with 0-18, as only 25 overs were completed.

Durham slipped to 47-2 as Ajmal Shahzad (2-23) saw off Mark Stoneman (23) and bowled Michael Richardson for four.

Keaton Jennings and Gordon Muchall were both on 24 at stumps, but the former was dropped twice on his way as Durham closed on 78-2, 299 runs behind.

"A disappointing day as the soggy conditions stalled this game just as it was moving nicely along.

"The Notts attack toiled away in pursuit of wickets before lunch, with Ajmal Shahzad again getting reward for a fine start to the season.

"With more inclement weather forecast over the second half of the contest, it may well become a bonus-point scoring exercise from now on."

"After Keaton Jennings was dropped on 12 and 19, he also survived a massive appeal for caught behind off Andre Adams.

"Umpire Neil Mallender said the ball clipped his arm and not the bat, which angered Australia seamer Peter Siddle, who was then spoken to by the official.

"Earlier, the introduction of Ajmal Shahzad in the 16th over paid off as he took two wickets in his first 10 balls to see off Mark Stoneman and Michael Richardson."