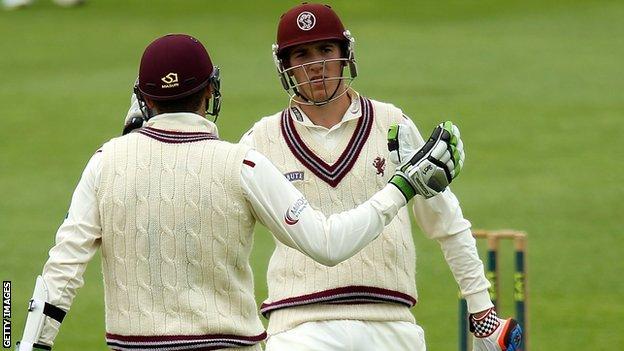 Jamie and Craig Overton kept Somerset in control on a rain-affected day two against Warwickshire at Edgbaston.

Resuming on 237-3, neither James Hildreth (98) nor Nick Compton (92) could reach centuries as the visitors found themselves reduced to 345-9.

Once Hildreth and Compton had been dismissed, the hosts had a grip on things as the dismissals continued, with substitute wicketkeeper Peter McKay making four catches.

But Somerset's 20-year-old brothers produced a late rally, Jamie reaching his maiden half century, hitting 10 fours and a six, before being removed by fit-again England fast bowler Boyd Rankin, who finished with 3-79.

Following his 15 not out, Craig Overton then made inroads with the ball, having home captain Chopra caught at slip with the Bears on 40.

Just after 17:00 BST - with Warwickshire 333 runs behind - rain brought the players in and they were unable to return.

"Somerset's total of 411 was certainly one they would have settled for when they were put into bat.

"While the fourth-wicket partnership of 163 between Nick Compton and James Hildreth was key, the 69 added for the last wicket by the Overton twins provided the icing on the cake.

"Watched at the other end by brother Craig, billed as the superior batsman, Jamie produced an uncomplicated display of shots all around the ground to post a career-best 56. All but 10 of his runs came in boundaries before he was last out.

"Brother Craig then accounted for Varun Chopra before drizzle brought proceedings to a premature close."