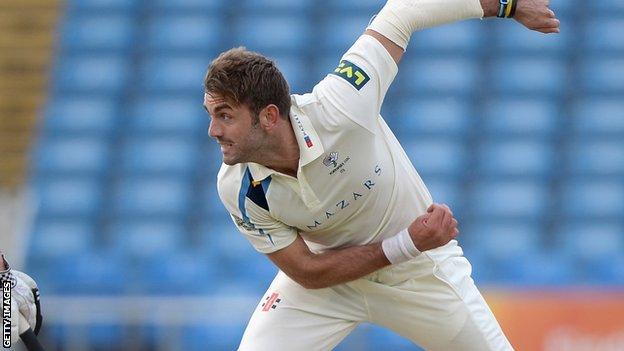 Resuming on 87-2, Lancashire compiled their highest score of the season.

Paul Horton and Tom Smith scored half-centuries and Kyle Hogg 47 not out - Brooks taking 5-90 and Plunkett 4-74.

Yorkshire pair Adam Lyth and Alex Lees guided the hosts to 29-0 at the close.

Opener Horton top-scored for the visitors with 66 and will no doubt be frustrated at his inability to push on this term as he passed 40 for the fifth time without making it to three figures.

He was one of three Lancashire batsmen to be bowled by paceman Brooks, who along with Plunkett has been a revelation for the Tykes since last April - taking 26 wickets in four-day cricket this season.

This summer, Plunkett in particular has been mooted as an England prospect, and taking his Championship tally to 19 wickets will help the seamer's chances of ending a seven-year exile from the Test team.

Brooks and Plunkett snared 70 Championship victims between them last term as Yorkshire were pipped to the title by Durham.

"On the second day of the Roses match before a splendid crowd, both teams had moments to cherish.

"Paul Horton, Tom Smith and Kyle Hogg helped Lancashire to their best first-innings score of the season to date.

"Ryan Sidebottom was off the field for Yorkshire with a hamstring injury, but Jack Brooks produced a splendid return and Liam Plunkett weighed in too.

"Yorkshire then made an encouraging start to their innings before rain ended play early."