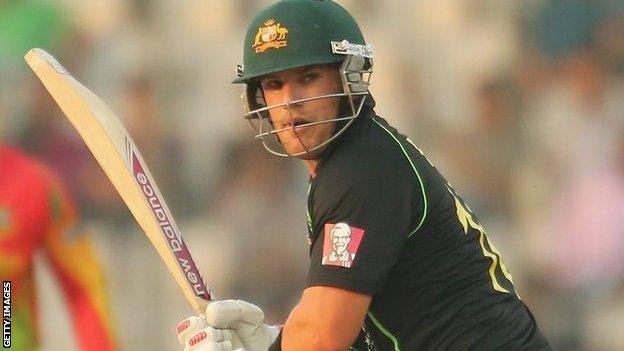 Australia limited-overs opener Aaron Finch wants to emulate the success his compatriots have had at Yorkshire.

The 27-year-old, the world's number-one ranked T20 batsman, has joined up with the Tykes for the rest of the summer.

"There's a great history of Australians here - Darren likes to think of himself as an Aussie-Yorkshireman," said Finch.

Former Australia seamer Jason Gillespie had a spell at Headingley during an illustrious playing career before returning to the county to become first-team coach in 2012.

"Jason and Darren had a big impact on me coming here," Finch told BBC Radio Leeds.

"Darren speaks very passionately about the place. It's very exciting, and I hope I can contribute to a few wins in T20 and the Championship."

Finch arrives for a first stint in county cricket after a spell in the Indian Premier League with Sunrisers Hyderabad.

He holds the record for a T20 international innings after scoring 156 against England in August but will play all forms of the game for Yorkshire.

"I am dying to play some four-day stuff and feel I can learn a lot from it," explained Finch, who is yet to make his Test debut.

"Coming straight from the IPL, I know the conditions are going to be a little different and might take a little while to get used to."