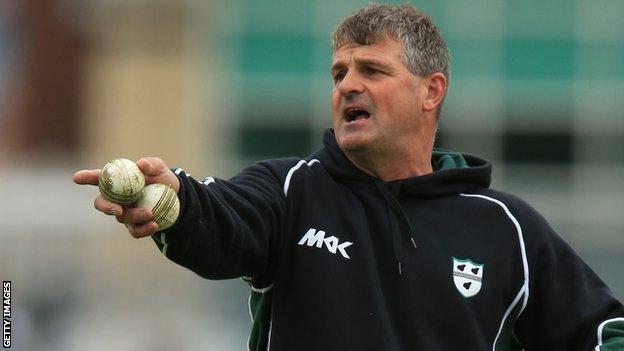 Worcestershire director of cricket Steve Rhodes was frustrated at being sidelined by the weather for the majority of his side's draw with Kent.

Searching for a fourth Championship win in six to return to the top of Division Two, a draw with four more bonus points would have taken them above Hampshire.

But just 17 overs of play were possible during the final three days.

"A fixture like this and we've only played a day and a quarter. It's incredibly frustrating," said Rhodes.

After managing just 14.1 overs on day two, then a mere 17 balls on the third day, the final day's play was called off altogether before tea by umpires Jeremy Lloyds and Steve O'Shaughnessy.

That left Worcestershire with just eight points from the fixture, four behind leaders Hampshire.

Asked if he thought any play might have been possible on the final day, Rhodes told BBC Hereford & Worcester: "In my view there was.

"You can only control what you can control. But it's very sad for us that we've only played for a day and a bit, we were all over Kent and yet we've got only eight points and they've come away with seven.

"We can still take so much out of that first day. We lost the toss on a wicket as flat as anything, but we bowled so well and in the field we saved 55 runs, which was an amazing effort.

"All we can do is prepare for our next game against Surrey at The Oval, starting on Sunday. But, before then, we've got Twenty20 again.

"We've got our first home game against Northants on Friday night and we go into it on the back of a high at Trent Bridge last Friday night, when we beat Nottinghamshire."

Worcestershire are scheduled to play Hampshire at New Road in what could be a meeting of the top two in the county's next home game on 8 June.