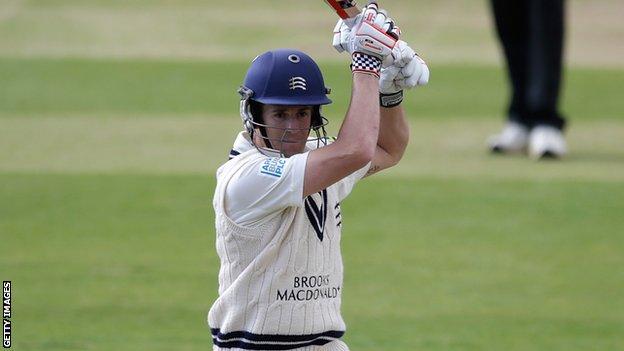 All-rounder Neil Dexter says Middlesex need contributions from every member of the squad if they are to sustain their County Championship title challenge.

They won four of their opening six games before this week's match against Sussex was washed out as a draw.

"To win the Championship it does take a big team effort throughout the season and so far we are doing that.

"There is a still long way to go, but deep down the boys are confident," the 29-year-old told BBC London 94.9.

"We started off quite well last season and faded off well towards the end. We can't make that same mistake.

"I don't want to look too far ahead, but I believe if we play the cricket we are at the moment and take confidence into each game, hopefully we will be competing at the top."

Middlesex, who finished fifth last season, currently sit top of Division One having picked up 11 bonus points for their batting and 17 for their bowling.

Captain Chris Rogers demanded an improvement from their middle order earlier this month.

Only bottom duo Lancashire and Northants have picked up fewer batting bonus points than Middlesex this season but Dexter believes they starting to turn a corner in recent matches.

"You look at the last few years, where we have messed up in the middle order," he said.

Statistics correct to 29 May

"Last year we were up there with just two guys scoring heavily. It has got to take the rest of us to chip in."

South Africa-born Dexter has been in good form for Middlesex recently, taking career-best bowling figures of 6-63 in the win over Lancashire and then hitting a career-best first-class score of 163 not out against Northants a week later.

The former Essex and Kent man says relinquishing the four-day captaincy to Rogers in 2012 has helped him prioritise his own form.

"When I was captain I put a lot of pressure on myself," Dexter said.

"Now I know I have a job to do for Middlesex; to bat, score runs, chip in with a few wickets and bowl maidens.

"With Buck taking over, he is doing a good job and I am concentrating on my game, which is probably a good thing. At the moment it is working."