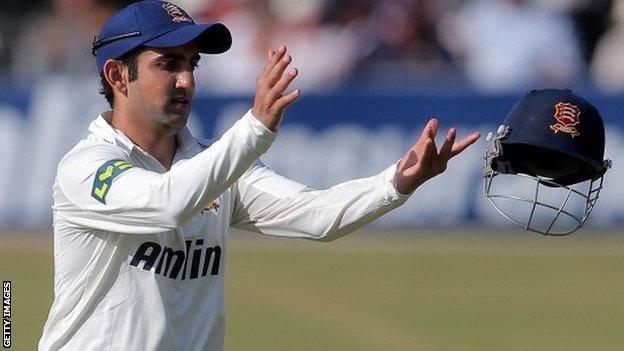 India have recalled opening batsman Gautam Gambhir for the five-Test tour of England which begins in July.

Gambhir, who has scored 4,021 runs and nine centuries from 54 Tests, returns at that level for the first time since December 2012 in an 18-man squad.

Fast bowler Zaheer Khan is absent after missing much of the Indian Premier League with a hamstring injury.

Seamers Pankaj Singh, Ishwar Pandey and Stuart Binny have been included despite having yet to play at Test match level.

The Indian selectors have opted for seven seamers in total, with Wriddhiman Saha chosen as reserve wicketkeeper for skipper Mahendra Dhoni.

Gambhir, one of the three openers named in addition to Shikhar Dhawan and Murali Vijay, had been overlooked for the home series against Australia and the West Indies last year and the January tour of New Zealand.

It will be India's first five-Test series since 1997 and their first of such a length in England in 55 years and they will hope for a different outcome to the 5-0 whitewash they succumbed to on that occasion.

They have not played a five-Test series since losing 1-0 in the Caribbean in 1997.

They arrive in England in the third week of June and will face Leicestershire and Derbyshire in warm-up matches before the opening Test in Nottingham begins on July 9.

The remaining Tests in London (Lord's and The Oval), Southampton and Manchester, will be followed by five one-day matches and a lone Twenty20 international.

The teams for the limited-overs matches to be played between 25 August and 7 September, will be named later.