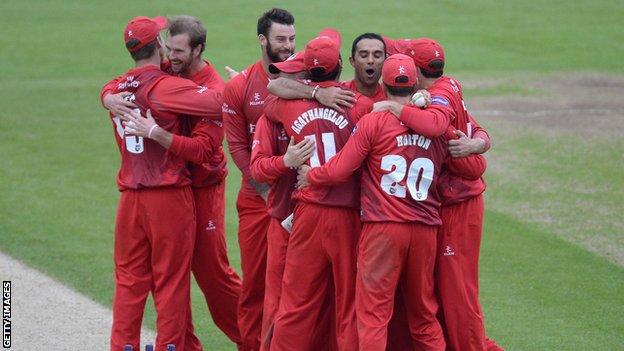 Lancashire are top of the North Group in the T20 Blast after defeating Durham by one run in a thrilling finish at Chester-le-Street.

Karl Brown struck 61 off 51 balls, including 23 runs from one Ryan Pringle over, as Lancashire posted 133-6.

Durham were comfortable at 98-3 in reply but Junaid Khan (3-21) brought Lancashire back into contention.

And the hosts fell agonisingly short of the 15 runs they needed from Kabir Ali's final over.

With four runs required from the last ball for victory, Pringle could only manage two.

The loss was Durham's first of the competition, while Lancashire have won three of their opening four matches.

Durham and England all-rounder Ben Stokes, making his first domestic T20 appearance since recovering from a broken hand, took 1-25 from three overs with the ball but failed with the bat, making just one before being bowled by Lancashire off-spinner Arron Lilley.