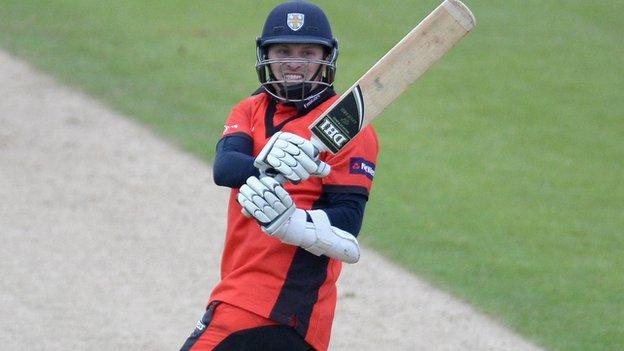 Mark Stoneman (16) and Phil Mustard (27) gave the visitors a solid start, before Steven Mullaney took 4-25 including two in two balls.

Earlier, Mustard and Stoneman put on 27 for the first wicket in 23 balls, but wickets fell at regular intervals as Andy Carter took 3-31 before Muchall, who scored a century against Notts in the Championship earlier in the week, saw Durham to a score of 132 for the second night in a row.

The hosts never got going in their run chase and lost Alex Hales, James Taylor and Michael Lumb for single-figure scores.

Read hit two sixes in three Gareth Breese deliveries on his way to 23 from 13 balls, but Notts had left it too late.

Sam Wood (11) hit a six off the last ball of the penultimate over to leave Notts needing nine to win off the final over.

But with four needed off the last ball, Wood holed out to Ben Stokes as Durham claimed their second win in the competition.