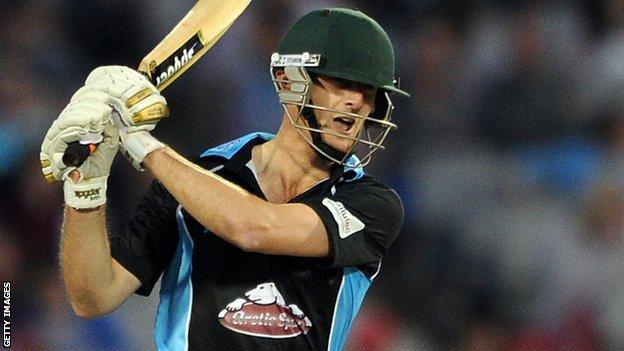 Richard Oliver made a quickfire 77 to guide Worcestershire to a five-wicket T20 win over Northants at New Road.

The holders made a blistering start, Richard Levi (27) and David Willey (34) scoring 56 off the first five overs.

But after Levi's dismissal by Moeen Ali, they limped to 134-7 despite 31 from captain Kyle Coetzer.

Newcomer Oliver made Northants pay by hitting three sixes and nine fours in his 43-ball knock as the Rapids reached 138-5 with 35 balls to spare.

Shropshire skipper Oliver was bowled by Steven Crook with the penultimate ball of the match, but he has been a revelation since being called up by Worcestershire at late notice for their T20 Blast game against Durham earlier this month.

He scored 43 at Chester-le-Street, then 34 at Old Trafford the following night, but his 77 matched those two scores put together as he outscored even Moeen (41) in a fine opening stand of 87.

Although Worcestershire slumped from 111-1 to 134-5 as Crook and Graeme White took two wickets each, including Oliver with the scores tied, there was no escaping a first defeat of this year's competition for the Steelbacks.

"I'm on trial here. You're always trying to prove yourself and I feel like this has gone a long way to doing that.

"It would have been nice to finish the game off and when I got back on strike with one run needed, I thought I'd do that, but I turned round and my poles were all over the place.

"I love all forms of cricket, but I've always really loved playing Twenty20. The first six overs when the fielders are up, it's happy days. I open the batting with Moeen Ali's brother Omar for Shropshire, so I feel really at home.

"I still just feel privileged to be here. I just want to stick around for as long as I can. You want to put yourself in a position where they can't not sign you - 14 June is deadline day for me. Two weeks' time. Then I'll know whether they'll hire me or fire me."