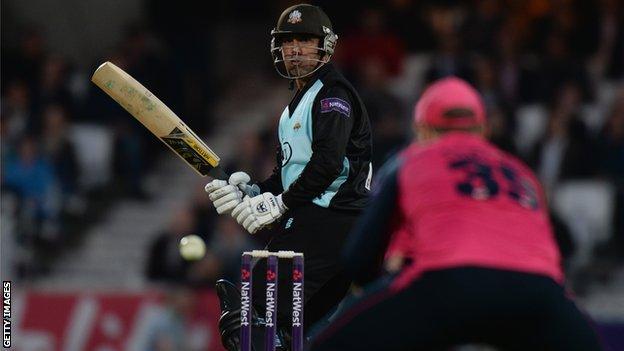 Middlesex's dismal start to the T20 Blast continued as they suffered a six-wicket defeat by Surrey at The Oval.

The Panthers only mustered 117-7 as opener Dawid Malan batted their entire innings for 48 not out off 51 balls.

Toby Roland-Jones added late impetus with a quickfire 30, but Surrey made a solid start as Hashim Amla (39) and Jason Roy (26) shared a 47-run stand.

Azhar Mahmood struck the winning boundary off Roland-Jones to finish on 10 not out, having earlier taken 1-21 with his medium-pace.

Surrey's most impressive performer with the ball, however, was 19-year-old Tom Curran, who bowled his four overs at a cost of just 15 runs, and picked up the wickets of Joe Denly and Christian.

The defeat was a fifth in succession for 2008 winners Middlesex, whose T20 form has been in marked contrast to performances in the Championship, in which they lead Division One.

"It was really good for us to get a win because T20 is a big competition for us this year after falling just short last year.

"I wasn't expecting to get man of the match, but building up those dot balls was part of my game plan and to keep them to a really low score, as we did, was really pleasing.

"It was a really good team performance because it could have gone either way, but all the boys pulled through.

"Sometimes the small totals are the hardest ones to chase, but we played our normal game and Hashim and Jason got us off to a great start. It's incredible to have got two wins on the bounce after being unlucky in the first game and we hope it is onwards and upwards now."