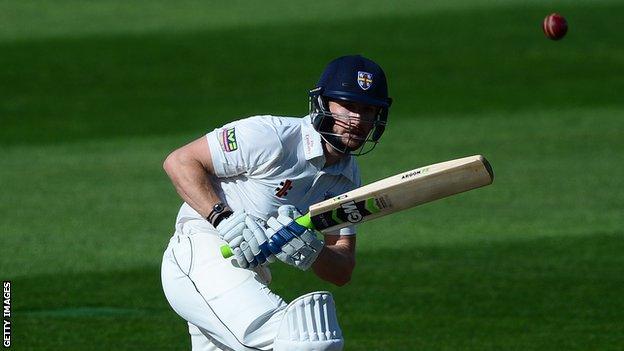 Mark Stoneman and Scott Borthwick both hit career-best centuries as Durham punished Middlesex for a series of dropped catches after being put into bat on day one at Chester-le-Street.

Stoneman smashed 26 fours on his way to a career-best 187, having been put down twice off Tim Murtagh on seven and 116.

Stoneman and Borthwick (164no) shared a county record second-wicket 274-run stand as Durham ended the day on 411-4.

England Test hopeful Borthwick also hit his highest first-class score, in an innings that included 21 fours and a six, to help the home side claim maximum batting points for the first time this season.

Division One leaders Middlesex continued to struggle on their travels, having already suffered innings defeats away to both Warwickshire and Sussex.

It was a particularly frustrating day for off spinner Paul Stirling, who had three simple catches put down off his bowling.

Chris Rogers was the main culprit, with the Middlesex captain putting down both Durham centurions, as the away side's decision to field first backfired.

"This was the perfect day for Durham after being put into bat. They took the Middlesex bowling attack apart and made it look very ordinary.

"There were elements of luck too, with Mark Stoneman dropped three times on his way to a career best 187. He had 50 on the board in the first hour and nearly got the 100 in before lunch.

"Scott Borthwick also posted a career-best score of 164 not out. The partnership of 274 for the second wicket was a club record and the 411 Durham made is believed to be their best haul on the opening day of a game too.

"You have to feel for the Middlesex spinner Paul Stirling had four chances put down off his bowling alone."