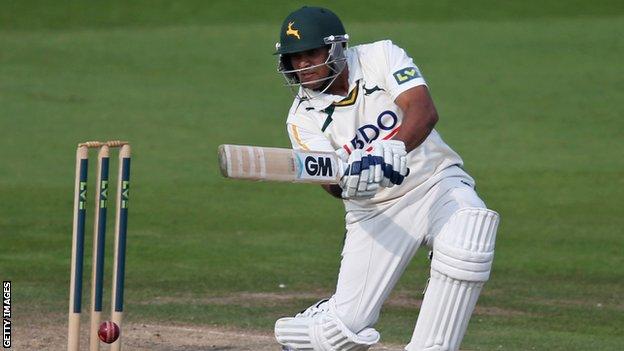 England hopeful Samit Patel continued his rich vein of form with an unbeaten century as Notts took control against Sussex on day one at Hove.

The 29-year-old, Division One's leading run-scorer with 509 runs prior to the match, finished on 142.

Matt Prior returned behind the stumps for Sussex, keeping wicket for the first time in first-class cricket since the third Ashes Test in Perth.

With England set to name the squad for the first Test against Sri Lanka this week, both players will be hoping to use this match to push their claims for a place in the side.

Chris Read also hit an impressive 61 not out for Notts as he shared a 160-run partnership with Patel, on the back of an impressive 67 from opener Phil Jaques.

Sussex debutant Matthew Hobden claimed his first two Championship wickets for the county, but James Anyon was forced to leave the field during the final session because of cramp as they struggled to make further inroads.

"The decision by Ed Joyce to ask Nottinghamshire to bat this morning probably looks a poor one.

"However had Phil Jaques been dismissed to a routine chance at first slip in the first over of the day, the story could have been different.

"As it was Jacques survived, and his innings of 67 laid the foundation for a formidable Nottinghamshire total, with Samit Patel in imperious form the visitors are in complete control.

"On the day Sussex celebrated their 175th anniversary, the sight of Matt Prior keeping wicket, and 21-year-old fast bowler Matt Hobden making his debut were rare positives, on a long day in the field for Sussex."