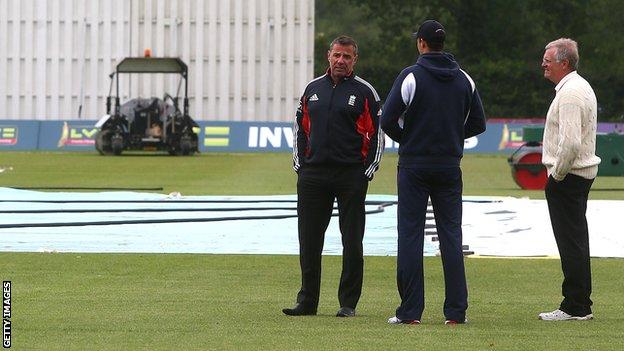 Middlesex and Sussex collected five points each after their Championship game at Merchant Taylors' School was abandoned without a single ball bowled.

Umpires Steve Garratt and David Millns decided no play would be possible following a 13:00 BST inspection.

The draw meant Middlesex moved 15 points clear of Somerset and Yorkshire at the top of the Division One table, but they each have a game in hand.

"A damp outfield following three days of persistent rain at Merchant Taylors' School meant play was abandoned without a ball being bowled.

"Although the sun was out all morning in north west London, there were particular patches of concern for the umpires and the decision to call quite on the match came after an early lunch was taken.

"It was the first washout in a home County Championship fixture for Middlesex since April 1999, when Lancashire were the visitors to Lord's."