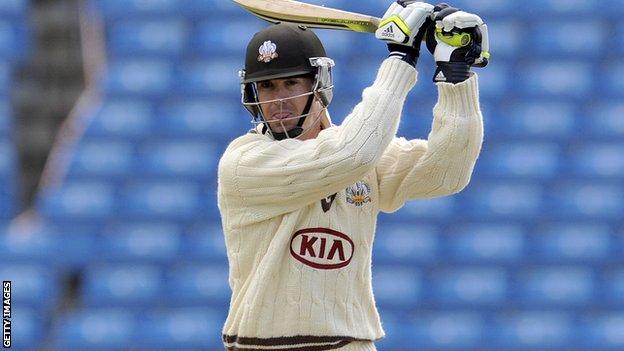 Kevin Pietersen has been ruled out of a return for Surrey in Friday's Twenty20 against Middlesex with a finger injury.

The former England captain, 33, suffered with the problem during his Indian Premier League campaign with Delhi Daredevils.

After seeing a hand specialist, Pietersen has been told he will require five days of intensive physiotherapy.

His return is now scheduled for the T20 Blast game against Essex at the Oval on 6 June.

Surrey have confirmed the batsman will be available for the remainder of the competition.

Some reports suggested Pietersen would travel back and forth to the West Indies after signing for St Lucia Zouks in the Caribbean Premier League.

But he will only leave after their group games conclude on 25 July and return if Surrey reach the quarter-finals and finals day.

Pietersen has not played a match in England since being discarded by the national team in February.

He has since captained Delhi Daredevils in the IPL and apologised to supporters after the team finished bottom of the league.

Last week, Pietersen issued a statement rejecting claims from England and Wales Cricket Board managing director Paul Downton that he was "disinterested" during England's 5-0 Ashes defeat in Australia.