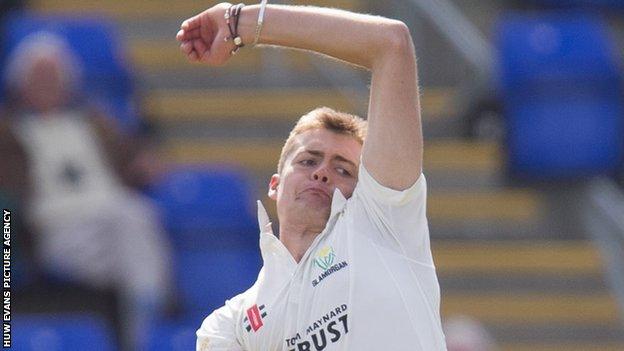 Glamorgan have extended the loan stay of Middlesex youngster Tom Helm until 19 June.

The 20-year-old, was initially recruited for a month at the beginning of May, to provide seam-bowling cover.

He has taken six wickets in the three County Championship matches he has played since signing.

I believe this is a win-win situation for all concerned

"I am sure he will continue to benefit from his time at Glamorgan," said the county's chief executive Hugh Morris.

"Tom has been a valuable addition to our playing squad over the past month and has continued to develop and grow in confidence over the three games he has played for the club.

"He has fitted into our dressing room extremely well."

The new deal means that the bowler can play in Glamorgan's next two matches in Division Two against Essex away on 1 June and Kent at the SWALEC Stadium on 15 June.

Middlesex's managing director of cricket, Angus Fraser, said the deal is good for all parties.

"I believe this is a win-win situation for all concerned," said Fraser.

"Middlesex have a talented and extremely promising young fast bowler who is capable of playing First Class cricket but is currently unable to get those opportunities with us.

"Going on loan to Glamorgan allows this to happen and for Tom to continue his development."