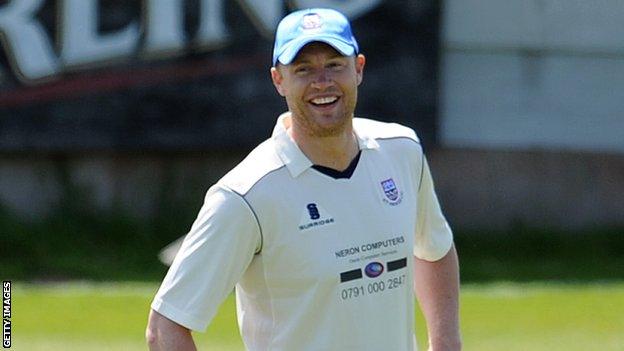 The 36-year-old, who has re-signed for Lancashire to play in this summer's T20 Blast, took 3-26 in 12 overs, including five maidens.

His efforts helped dismiss Penrith in their Northern League match for 132.

But Flintoff then scored only two runs with the bat as St Annes went on to win by two wickets.

Flintoff said on Twitter: "Loving my day, 12 overs and great fun. Had a bit of help from Watty the keeper for my first wicket, still not sure it carried."

He starred in the Ashes triumphs over Australia in 2005 and 2009, but retired the following season to end a career plagued by injuries.

However, Flintoff has been training with Lancashire since March and is expected to make his return for the county in Friday's T20 Blast Roses match against Yorkshire, although director of cricket Mike Watkinson has said he is not guaranteed a place.