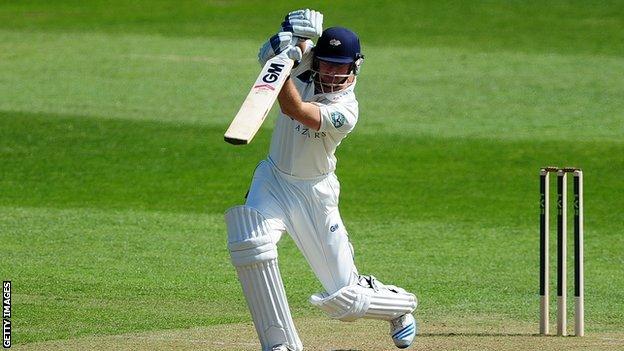 Yorkshire atoned for their first-innings batting failure as Adam Lyth and Alex Lees turned the tables on Northants on day two of their Division One match at Wantage Road.

Lyth made 116, passing 500 first-class runs for the season in the process, while Lees finished on 105.

Ben Duckett earlier made 51 as winless Northants added 60 for their last three wickets before being dismissed for 251.

Good record against the Tykes

Northants are unbeaten in their last 14 home Championship matches against Yorkshire, winning eight and drawing six

That gave Division One's bottom side a lead of 115, but it could have been even higher had Duckett not had a rush of blood immediately after bringing up his half-century and been bowled by spinner Adil Rashid attempting a switch-hit.

Facing such a deficit, third-placed Yorkshire needed a good start and Lyth and Lees provided exactly that, showing plenty of patience against a workmanlike attack, but also putting away any loose deliveries that came along.

Lyth, who went for a duck as Yorkshire were dismissed for just 136 on the opening day, was first to three figures off 194 balls, and struck 17 fours in total.

His younger partner needed 28 more deliveries to reach his first Championship hundred of the summer, having been dropped at mid-wicket on 78.

Their partnership is the highest for the first wicket in the Championship this season and they need a further 43 runs on the third day to beat Yorkshire's record opening stand of 279 against Northants, set by Percy Holmes and Herbert Sutcliffe in 1919.