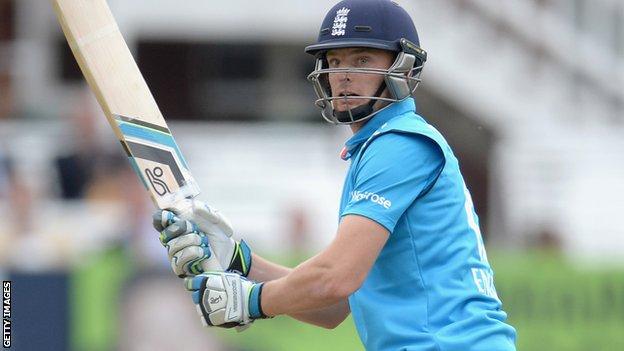 England captain Alastair Cook says wicketkeeper Jos Buttler is not yet ready for a place in the Test side.

England's long-time Test keeper Matt Prior was dropped during the Ashes and has struggled with injury this season.

But Cook said: "Buttler will be a very good Test player at some stage. Talented people find ways to do that, but I don't think he's quite ready."

Buttler became England's first-choice limited-overs wicketkeeper while at former county Somerset, despite his county and international team-mate Craig Kieswetter being the preferred gloveman at Taunton.

He joined Lancashire for this season in order to have more opportunities behind the stumps and to work with coach Peter Moores, himself a former keeper, who has now taken charge of England for the second time.

The right-hander tops Lancashire's Championship batting averages with 252 runs at 42 from six innings but, although he is keeping in four-day cricket, he has only kept in 22 first-class games in his career.

However, it is with the bat that Buttler has impressed for England, striking a 61-ball hundred to rescue England from 111-5 in their chase of 301 at Lord's on Saturday.

Arriving at the crease in the 29th over, Buttler struck 11 fours and four sixes to leave the hosts needing only 12 from the final set.

He was run out with two balls remaining as Sri Lanka seamer Lasith Malinga conceded only four runs to level the series at 2-2 with a decider to come at Edgbaston on Tuesday.

"He's not doing himself any harm, and he's certainly found his method in one-day cricket," added Cook. "He knows what he's doing [but] I think he's yet to find that in four-day cricket.

"I think he'll be honest with himself - he needs more time to do that. But a guy who is as talented as that, there's no reason why he can't."

England are set to name their squad for the first Test against Sri Lanka, which begins on 12 June, next weekend.

Prior, who has been suffering with an Achilles tendon injury, is keeping wicket in a first-class match for the first time since December in Sussex's Championship match against Nottinghamshire, which began on Sunday.