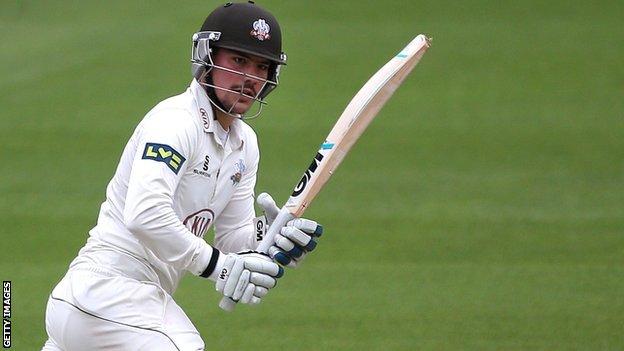 Surrey made a spirited start in response to Worcestershire's big total as they reached the close on 134-2.

No buses down Harleyford Road

But Burns' departure. to what proved to be the final ball of the day, from star spinner Saeed Ajmal, was a big blow.

After taking 13 wickets in Worcestershire's last home match, it took the Pakistan Test ace until the fifth ball of his 16th over to make a breakthrough.

But, with former Worcestershire skipper Vikram Solanki due to be next man in on the third morning, Surrey will resume needing a further 193 runs to avoid the prospect of being asked to follow on.

The visitors fell short of maximum batting bonus points, largely because of the early loss of Moeen, but his downfall allowed Cox to come in and continue his good form with the bat as he posted his second Championship half century of 2014.

"An excellent fightback by Surrey and it was a surprise when Rory Burns went to the penultimate ball of the day, having read Saeed Ajmal well until then on a wicket with little spin in it.

"Worcestershire would have looked for 500 but, once Moeen went it was left to the ever-improving Ben Cox to boost their total.

"Chris Tremlett was the pick of the Surrey attack hampered by the unavailability of Jade Dernbach before lunch after being stuck in horrendous traffic around The Oval.

"Ajmal again looks the danger man for Worcestershire, but he will need his full repertoire to winkle out the batsman on a pretty flat pitch."