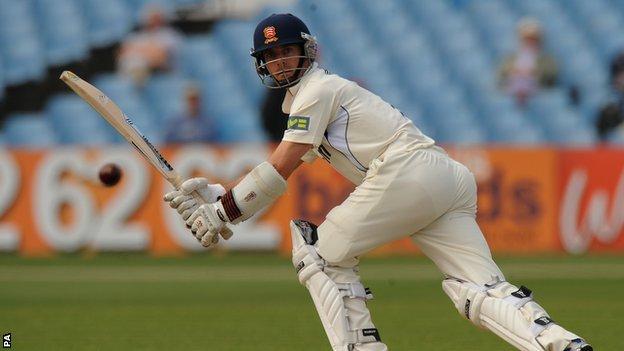 Essex captain and wicketkeeper James Foster boosted his hopes for an England recall with a half century to nudge his side in front against Glamorgan.

The 34-year-old made 86 to help Essex to 280 in their first innings, a lead of 36, after Mark Pettini's dismissal for 51 triggered a mini-collapse.

Foster's last appearance for England was in a T20 international against West Indies at The Oval in 2009.

He has not played a Test match since the Boxing Day Test in Melbourne on the 2002-03 Ashes tour.

Reece Topley followed his 6-41 in Glamorgan's first innings by batting for 85 minutes to help Foster add 63.

Earlier in the day, Essex lost both openers with 42 on the board, but Greg Smith (42) and New Zealand's Jesse Ryder (42) steadied the ship with a partnership of 65 before Pettini saw them to 186-5.

When he was caught by Graham Wagg (3-76) off Dean Cosker, the home side lost three wickets for 12 runs.

However, Foster, who last played international cricket in July 2009, showed all his experience to steer Essex into a narrow lead.