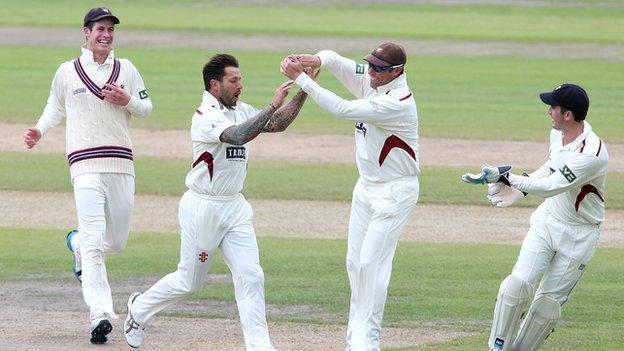 Somerset's bowlers kept them in control against Lancashire at Old Trafford on a rain-shortened second day.

Only 40 overs were possible, but two wickets in the first four of Lancashire's first innings left them on 22-2, replying to Somerset's 420.

Alviro Petersen fell for 155 after over five hours at the crease as 108 was added to the visitors' overnight total.

Paul Horton and Andrea Agathangelou were then lbw to leave Lancashire needing to regroup on day three.

Resuming on 312-3, Somerset got off to a poor start when Alex Barrow offered no shot to the last ball of Glen Chapple's opening over and was leg-before.

Petersen, who began the day on 109, continued to hold the Somerset innings together, but when he perished, cutting the left arm spin of Simon Kerrigan to point, they quickly folded as the last three wickets fell for 16 runs.

Kerrigan, who finished with 3-94, claimed the 200th first-class wicket of his career when he had Alfonso Thomas caught for a duck.

Lancashire's hopes of carrying their momentum with the ball into their reply were shattered when Horton, opening with 19-year-old wicketkeeper Alex Davies, was pinned in front for nought by Thomas.

And 11 balls later, Agathangelou was also lbw to Peter Trego, but Somerset were unable to press home their advantage further before play was officially abandoned just after 1700 BST.

"Lancashire showed real fight in the morning to get themselves back into the game, taking Somerset's last seven wickets for 108 runs.

"The cloudy conditions could hardly have been more different to the glorious sunshine of the first day, and the bowlers certainly made the most of it.

"The Red Rose tinkering with the team for this match saw Alex Davies open with Paul Horton and if the wicket-keeper can score runs, then he looks certain to keep his place in the team as a batsman."

"What a difference a day makes - on day one, two wickets fell for 312 runs; on day two, nine went down for just 130, before heavy rain brought a premature end to proceedings.

"A mixture of persistent bowling, and slightly sloppy batting accounted for the seven Somerset wickets which fell in the morning session, Alviro Petersen eventually bowing out with an innings of 155 which oozed class.

"Lancashire lost Paul Horton and Andrea Agathangelou quickly when their turn came to bat, and they face a tough task to get themselves back in this game, on an increasingly capricious pitch."