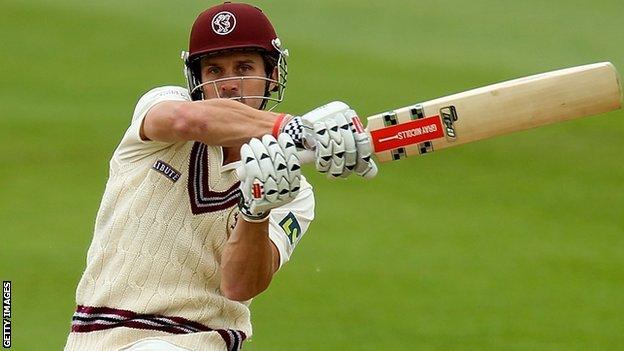 Batsman Nick Compton believes he needs to convert big scores into centuries for Somerset to earn an England recall.

The 30-year-old opener has scored 91 and 92 in his last two Championship innings against Warwickshire and Lancashire respectively.

But Compton, who won the last of his nine Test caps a year ago, believes his current form may not be enough to earn him an international return.

He has made one century this summer against Durham, but is frustrated that he has not capitalised on other opportunities.

"Since I've been dropped by England, I think I've got seven 90s," he added.

"Why is a 90 any different to 100? It's only seven or eight runs, but it seems to make a bigger statement.

"It's highly frustrating as I've worked incredibly hard to force my way back in.

"Unfortunately, with the cards that I've been dealt, 180s and 190s are the scores I need to get to force my way back in."

South Africa-born Compton earned his first England call-up in 2012, after finishing the summer as the top scorer in the County Championship with 1,191 runs from 11 matches, batting at number three.

But eight months later he was dropped after scoring only 39 runs in two home Tests against New Zealand, despite having made consecutive centuries in the previous series, and also missed out on an Ashes tour spot last winter.

England's squad for the first Test against Sri Lanka, which begins on 12 June, will be named on Thursday.

But Compton is staying focused on Somerset's four-day match with Lancashire, which could see them move to the top of the table.

"We're playing good cricket and we're right at the top of the Championship," he added.

"And the partnerships I've had with James Hildreth and now with Alviro Petersen, it's fantastic to be a part of this team at the moment."