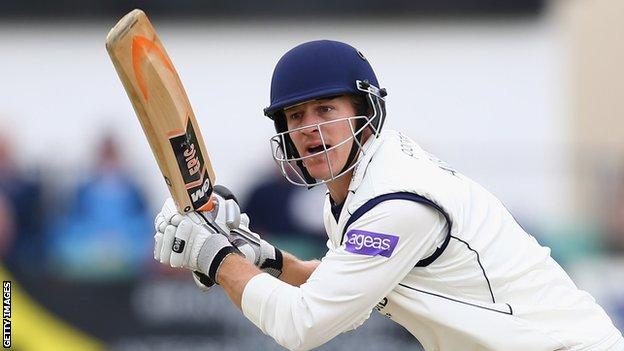 Jimmy Adams hit his second half-century of the match as Hampshire declared on 214-5 before Derbyshire reached 31-0, chasing 346 to win.

Earlier, Hampshire spinner Danny Briggs had claimed his fifth wicket to help bowl out the visitors for 257.

Adams then hit 67 and was supported by Joe Gatting (39) and James Vince (40) to set up a teasing declaration.

"With the prospect of heavy rain on the final day, Hampshire went on the attack after tea in pursuit of quick runs and a slightly earlier declaration than might otherwise have been considered normal.

"With Sean Ervine clubbing 32 not out off just 13 balls, the declaration came just after five o'clock.

"Spectators will hope for a full day on Wednesday when Derbyshire need another 315 runs to win.

"For entertainment purposes, it is ideally poised. Sadly if the forecasters are right, it will be anything but entertaining."