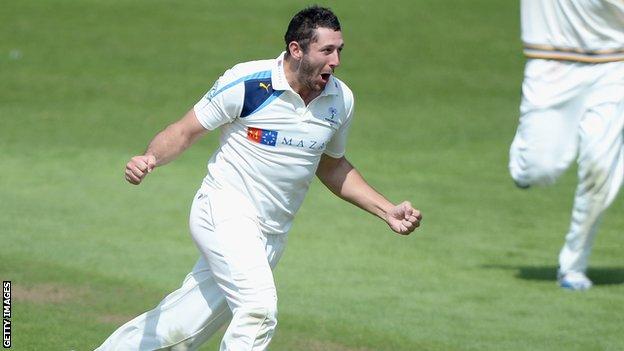 Liam Plunkett and Tim Bresnan were the chief destroyers as Yorkshire wrapped up a 271-run victory over struggling Northants at Wantage Road.

It was a fifth successive Championship defeat for the home side, who had led by 115 runs after the first innings.

They were bowled out for 160 in mid-afternoon, with paceman Plunkett taking 4-42 and England seamer Bresnan 3-46.

Rob Newton top-scored for Northants with 33, as their batting problems were again exposed by Yorkshire's attack.

Having mustered only 27 points from their first six games after winning promotion last summer, they are already facing an uphill struggle to avoid an immediate return to Division Two.

Yorkshire, meanwhile, collected 19 points to return to the top of the table, pending the outcome of other games involving Middlesex and Somerset, which began a day later.

Having been set a remote target of 432, Northants resumed on 66-3 after a half-hour delay, but lost Matthew Spriegel to the opening delivery of the final day when he was lbw to Bresnan, offering no shot.

Rob Keogh (25) did not last long before edging Jack Brooks to the wicketkeeper and Andrew Hall (24) then became Plunkett's first victim before lunch, caught at cover after being in two minds about attempting a pull shot.

Newton hung on for two and a quarter hours, but when he edged Plunkett to Aaron Finch in the slips, it was simply a matter of time.

Plunkett struck Ian Butler on the helmet before the New Zealander was lbw to spinner Adil Rashid, but finished the match himself by bowling Maurice Chambers as Yorkshire completed a seasonal double, after beating Northants by an innings and 120 runs at Headingley in April.