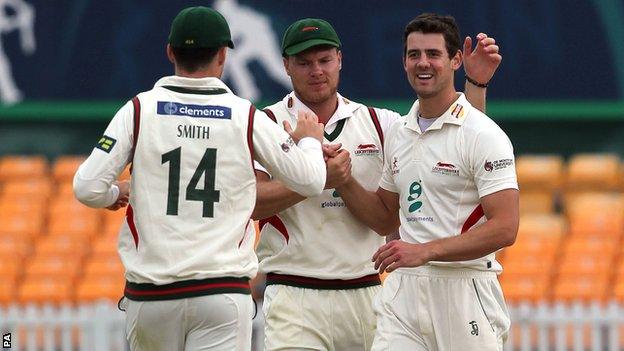 Rob Taylor and Nathan Buck took nine wickets between them as Leicestershire fought back to earn a narrow first-innings lead against Gloucestershire.

The hosts had struggled with the bat on day one but Taylor's fine swing bowling dismissed two of Gloucestershire's top three and set the tone for the day.

Geraint Jones hit a swashbuckling 93 in Gloucestershire's 260, and the home side had made 12-0 when play ended.

Former England wicketkeeper Jones smashed three sixes in his superb 75-ball innings before missing an attempted sweep, but only Will Gidman, with a stubborn unbeaten 52, made a significant contribution alongside him.

"The news that Charlie Shreck had been rendered hors de combat by a bad back was a huge blow to the Foxes, and rendered their efforts in bowling out Gloucestershire for 260 all the more admirable.

"Remarkably they also lost another seamer, young Alex Wyatt, in mid-innings, and with no turn in the wicket for Jigar Naik - though the off-spinner performed a vital holding role and picked up the key wicket of Geraint Jones - their attack was effectively reduced to two men, the seamers Rob Taylor and Nathan Buck.

"Both men gave everything they had and were rewarded. Taylor, a left-armer, swung the ball back in to the right-handers to win two leg before decisions and bowl Alex Gidman with a delivery the batsman left, and fully deserved to finish with a career-best 5-55.

"Buck, relishing the responsibility, ran in with real spirit and his four-wicket haul means he has now overtaken Shreck as the county's leading wicket-taker - having played two matches less."

"Gloucestershire will be disappointed not to have overhauled Leicestershire's first innings total as the top order, again lacking consistency, failed to build a foundation.

"Michael Klinger has still to produce a big innings this season and the lack of a decent first-wicket partnership remains a problem.

"Will Gidman added an unbeaten half century to his five wickets, but it was Geraint Jones who caught the eye with an aggressive display and it was a surprise when he was lbw within sight of three figures.

"The announcement of the premature retirement of Ian Saxelby was a sad note for Gloucestershire in an intriguing second day."