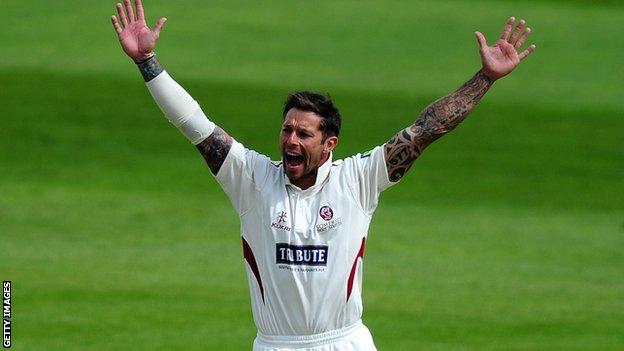 Peter Trego's inspired new-ball spell put Somerset in position to press for victory after they asked Lancashire to follow-on at Old Trafford.

The Red Rose county were bowled out for 203 in their first innings, despite a defiant 62 by 19-year-old Alex Davies.

Having lost two wickets on the second evening against Division One's only unbeaten side, Lancashire began the day solidly as Davies and Ashwell Prince, 18 years his senior, put on 78.

After Prince played on to Overton, however, Steven Croft was the only other batsman to reach 20 as the home side slumped from 145-4 to 162-8 in the space of eight overs, with Davies finally caught off Trego after facing 152 balls in his three-and-a-quarter hour stay.

Tea was taken after Lancashire were all out and Trescothick's decision to enforce the follow-on immediately paid off as Trego sent back Davies, this time lbw for five, Paul Horton and Prince in a nine-over burst.

Agathangelou and Karl Brown (22) prevented further damage, sharing a 52-run stand as the Somerset attack tired before the close, but Lancashire face a difficult task to salvage a draw on the final day if they do not receive any help from the weather.

"Lancashire have only passed 300 twice this season, and only once in the first innings, and their frailties with the bat were exposed again.

"Take nothing away from Somerset, who bowled and fielded superbly as they made Lancashire follow-on for the first time in a match since 2012.

"Alex Davies' highest first-class score provided the highlight of their first innings and Karl Brown and Andrea Agathangelou's unbeaten partnership of 52 has given Lancashire some hope of avoiding defeat, but in truth they may need to rely on the weather."

"Accurate, aggressive bowling from Somerset contrasted sharply with a rather limp batting display from Lancashire, and reaped its due rewards, as the home side were forced to follow-on.

"The irrepressible Peter Trego led the way for Somerset, following up his 3-37 in the first innings with all three of the wickets to fall in the second, while for Lancashire, the young wicketkeeper Alex Davies made a neat career-best 62.

"Somerset have put themselves in a position to win, but it could be the weather which has the last word."