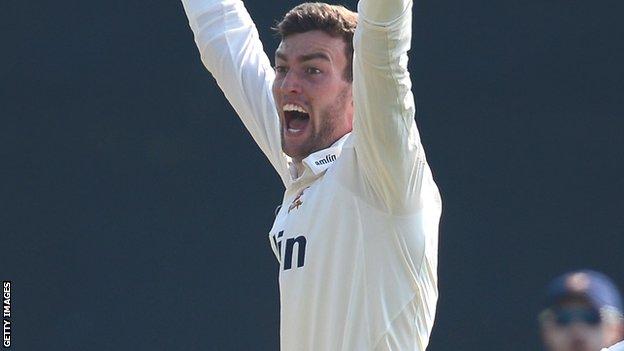 Reece Topley claimed the second 10-wicket match haul of his career with Essex on top against Glamorgan.

The visitors began day three 36-runs behind from the first innings and lost Tom Lancefield to Topley for two.

Jacques Rudolph (46) and Will Bragg (46) put on 48 for the second wicket to wipe out the deficit.

The 20-year-old is playing his first Championship match of the season after injuring his back in pre-season.

Tom Moore chipped in with 3-62 and there was also a wicket for Jesse Ryder.

Jim Allenby ended the day unbeaten on 34 with Michael Hogan on 11 not out.

"Glamorgan ended day three 152 in front with only two wickets left after 27 overs were lost to a combination of a heavy lunchtime deluge and a brief stoppage for bad light.

"Reece Topley took four wickets to bag 10 in a match for the second time in his fledgling career and his first was his 100th first-class victim.

"Tom Moore also impressed with three wickets at a praiseworthy economy rate, but otherwise Essex conceded rather too many leg-side boundaries.

"They will be mindful Jim Allenby has twice thwarted them in previous seasons, and that Wednesday's forecast is dire."