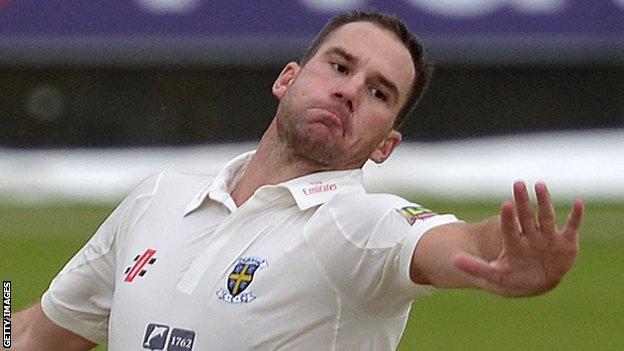 Durham all-rounder John Hastings says he is happy to be playing in the County Championship after making just one Indian Premier League appearance.

Hastings delayed his move to England to play for Chennai Super Kings.

The 28-year-old made his Durham bow against Middlesex on Monday, ending on 38 not out with the bat before taking the wicket of Chris Rogers.

"It was hard being in India for eight weeks, not really getting close to a game," Hastings told BBC Newcastle.

"It was a bit different over there, I was training very hard to get as fit as I could.

"To come over here and get a game of cricket, I'm jumping out of my skin."

Penrith-born Hastings, who has made 15 appearances for his country across all three formats, has been a regular in limited-overs cricket competitions such the Big Bash and IPL.

However, he also took 27 wickets and scored 276 runs in nine Sheffield Shield games for Victoria as evidence of his four-day credentials.

"I like the long form of the game," Hastings added. "I've been fortunate enough to have one season at Wimbledon.

"I'd been trying to get in on the county scene for a while now and hopefully I can do really well for Durham."