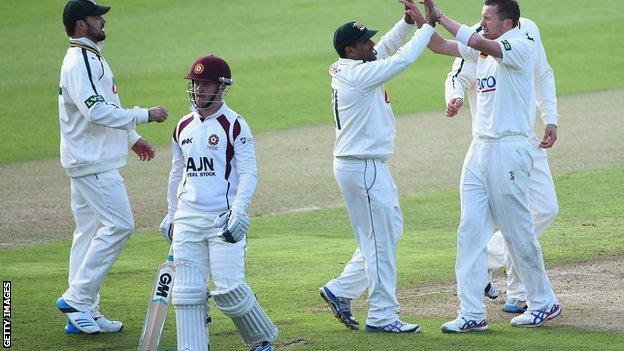 Northants chief executive David Smith has said his side's batting performances are letting the club down.

"We're letting ourselves, our members and our supporters down. We're capable of playing a lot better and clearly it can't be allowed to continue."

Winless Northants, who face England's upcoming Test opponents Sri Lanka in a tour match on Thursday, looked to be in a strong position against Yorkshire, after bowling the visitors out for 136.

But David Ripley's side could only muster 251 in reply and, after Yorkshire declared their second innings at 546-3, the hosts went on to add just a further 160 runs.

Failures with the bat have characterised Northants' season since winning promotion to County Championship Division One last year.

After scoring 378 against Durham in their opening Championship game, they have failed to pass 300 again in 11 innings and no Northants batsman has scored a Championship century this summer.

"We have to address that and we will address that. We've got a bit of respite against Sri Lanka, where we will have quite a few of our younger players on show," said Smith.

"It's a great opportunity for them to score some runs and push for a place because clearly we can't keep picking the same team when we keep losing.

"We are capable of being more competitive and clearly in the last few games we haven't competed, with the bat in particular, and that's a major worry for us.

"We can't keep going on making the same mistakes from the same players."