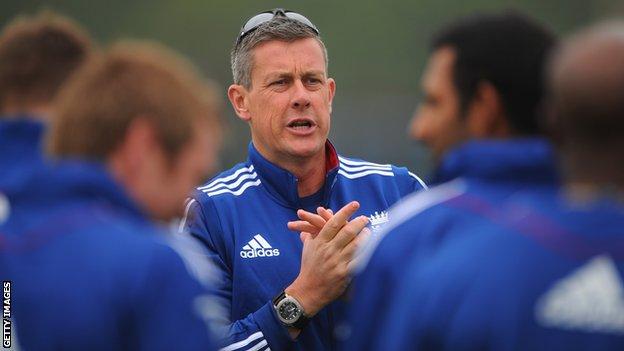 Ashley Giles says he is struggling to accept missing out on becoming England's head coach.

The 41-year-old had led England in the limited-overs format since 2012 and was favourite to take over when previous boss Andy Flower resigned.

However, following a poor World Twenty20 campaign, Giles was overlooked in April in favour of Peter Moores.

Giles said: "I went from being one of the most connected people in English cricket to getting my P45 in the post."

The former spinner, who played in 54 Tests for his country, led England to a disappointing 4-1 one-day international series defeat against Australia in January.

He was then in charge of England's World T20 campaign in Bangladesh, in which they failed to progress beyond the group stage and bowed out with a shock 45-run defeat by the Netherlands, in March.

In his first full-length BBC interview since missing out on the England coach's role, he told Test Match Special: "I thought I was a frontrunner, but losing to the Netherlands was the final nail in the coffin.

"I believed and still believe I can do the job but unfortunately I was not the one to make the decision.

"While I have had my low moments I am keen to start looking forward. I still have bad days, it was disappointing, but we move on."

Giles also quit as an England selector in April, meaning he is facing a first lengthy spell out of work since joining Warwickshire in 1992.

Sri Lanka, England's opponents in the ODI series, briefly had a head coach vacancy after Paul Farbrace resigned to join the England set-up, but Marvan Atapattu was quickly appointed as his successor.

"A lot was said as soon as I lost the job and the Sri Lanka job came up. I'm not sure if they would have wanted me anyway, but it was not right," added Giles.

"The coaching fraternity is quite a small community, there are limited opportunities, so I am keen to broaden my horizons and look upwards and outwards as well.

"I've just signed up for a Masters course at Manchester University in sports directorship. I want to give myself more options."