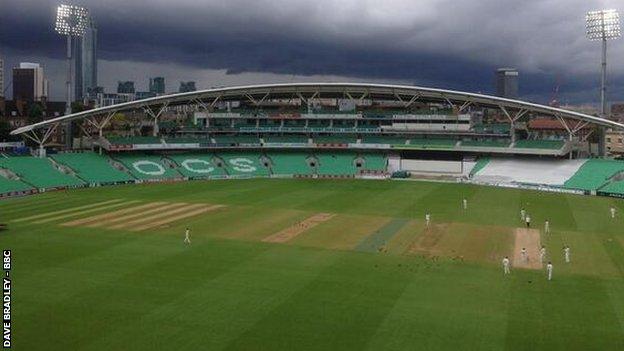 Worcestershire remained on the heels of leaders Hampshire despite being held to a second successive rain-affected draw as Surrey avoided defeat at The Oval.

After a delayed start, 21 overs were bowled in the afternoon session, during which the visitors removed Zafar Ansari (62) for the first time in the game.

Luck of the draw

But the spinners could not prise out more wickets, as Surrey ended on 240-5.

Saeed Ajmal surprisingly ended wicketless, picking up just one in the match, but England hopeful Moeen Ali did his chances of a Test call no harm by having Davies caught behind.

Charlie Morris claimed the other wicket of Ansari, who had hit an unbeaten 77 in the first innings.

Worcestershire's 12-point haul from the game matched that of Division Two leaders Hampshire, who remain four points clear on top after being held up by in a draw with Derbyshire.

But they will go head to head with Hampshire on Sunday when New Road stages the meeting of the top two.

"Not for the first time this season the weather held up a Worcestershire victory charge.

"A minimal amount of play on the last day and the batting of Ansari allowed Surrey to hang on for the draw, after being outplayed for a big part of the game.

"Indeed it was a major surprise when Ansari went to a slower ball from Morris.

"Remarkable that Saeed Ajmal only took one wicket in the game, but testament to Worcestershire's team ethic that others came to the fore, notably Jack Shantry, whose spell on the third day ripped through Surrey's middle order."