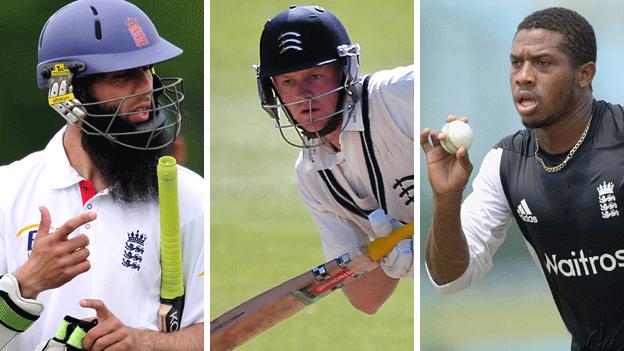 England have named uncapped trio Chris Jordan, Sam Robson and Moeen Ali in the squad for the first Test against Sri Lanka at Lord's on 12 June.

Back in the mix

Fast bowler Liam Plunkett is in line to play his first Test since 2007, when he took just one wicket in a 60-run victory against West Indies at Old Trafford. In his previous nine Tests, he has taken 23 wickets at an average of 39.82.

Wicketkeeper Matt Prior is included, while bowler Liam Plunkett returns after a seven-year Test absence.

Plunkett, 29, has enjoyed a resurgence at Yorkshire, where he is bowling with real pace, often touching 90mph. He has taken 24 wickets this season at an average of 24, while he has a highest score of 86 with the bat.

"It's very exciting for Liam," said national selector James Whitaker. "He's shown all the hallmarks of a spearhead fast bowler.

"He's bowled some really quick spells. The quickest was at Lord's. He'll be confident there and we wish him well."

In Peter Moores's first squad since he become head coach for a second time, there is no place for Durham all-rounder Ben Stokes, who was one of the few positives to emerge from England's disastrous Ashes whitewash over the winter.

The 23-year-old has only just returned to action after breaking a hand when he punched a locker after being dismissed in a one-day international against West Indies in March.

"Stokes is very much part of England's future," said Whitaker. "We would like to see a few more overs under his belt, but he will be back soon."

Kevin Pietersen was not available for selection after being told he is no longer part of the national team's plans, while Jonathan Trott is recovering from a stress-related condition.

Lancashire wicketkeeper Jos Buttler, who struck the fastest ODI century by an England batsman during the Sri Lanka series, also misses the cut.

England will hope Sussex keeper Prior can rediscover his best form after being dropped during the Ashes series following a run of poor form with the bat. He has only recently returned from an Achilles tendon injury to play for his county.

The 32-year-old averages 40 with the bat in his 75 Tests, and Whitaker said: "Our number one priority is someone being 100% fit and we're confident Matt is. We believe he can be part of that core group of players that can drive the team forward over the next three or four years.

"It's a fairly predictable squad. I think it gives England's hand away as how they will approach the series, with a lot of pace bowling.

"I think Monty Panesar has a few things to deal with off the field. When they are sorted, I wouldn't be surprised if he comes back because he is a world-class spin bowler."

"Very few people go through their careers without a blip but he is just the sort of character we want in that team."

Jordan has impressed with bat and ball in one-day internationals since making his debut in the home series against Australia last year.

He hit 38 from 13 balls and took 3-25 in the first match against Sri Lanka at The Oval, and returned the best figures by an England bowler at Old Trafford with 5-29 in match three.

Worcestershire's Ali, meanwhile, was named Player of the Year by the Professional Cricketers' Association last season after scoring more than 2,000 runs in all forms of the game and taking 55 wickets with his off-spin bowling.

He has recently been working with his county's overseas player, Pakistan spinner Saeed Ajmal, to improve his bowling.

"Saeed is always giving me tips," said Moeen, who also represented England at this year's World Twenty20 tournament. "He has done it at the top level and what I'm practising bowling-wise, he has been through already so that gives me a confidence boost."

Robson gets his chance after impressing with the bat over the winter, when he scored two centuries for the England Performance Programme and three hundreds for England Lions on their tour of Sri Lanka.

"It took a little while to sink in," he told BBC Radio 5 live. "I was born and grew up in Australia until I left school but I've lived here for almost seven years now and this is my home and where my life has taken me. I love living here and this is where my life is I suppose."

The second match in the two-Test series against the Sri Lankans begins at Headingley on Friday, 20 June.