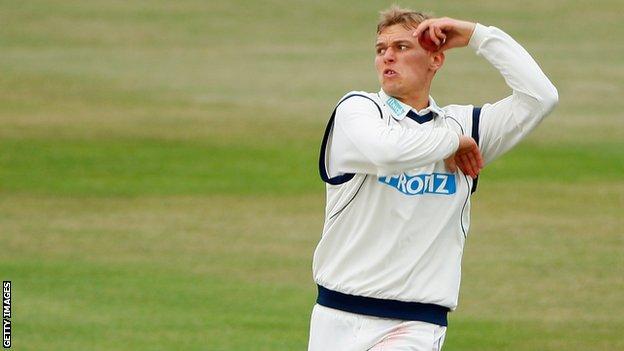 Hampshire spinner Danny Briggs says he is pleased with his early-season form after claiming five wickets in an innings for the first time in the Championship since 2011.

Briggs, 23, returned figures of 5-50 as Derbyshire were bowled out for 257 in their first innings on day three.

He has now taken nine wickets in his last two County Championship innings.

"As a unit we've all bowled well this year and it's nice to contribute to that," Briggs told BBC Radio Solent.

Briggs, who was only brought into the side after an injury to Liam Dawson, added: "I got some rhythm early in the season playing Twenty20 cricket and with the twos (Hampshire's second XI) and it's just about bowling in areas as consistently as possible.

"The two innings have gone well and I've got the wickets, but I'm sure I could bowl the same and not pick them up so I just have to make sure I do my job and am consistent."

Before the close, Derbyshire reached 31-0 in their pursuit of 346 for victory, and Briggs revealed he has changed the way he bowls in four-day cricket by increasing his speed.

"I've basically tried to bowl how I do in one-day cricket," he explained. "If I bowl faster then on days three and four it is probably going to spin a little bit more at that pace."

Meanwhile, fast bowler Kyle Abbott says playing for Hampshire has been a big factor in being named in a South Africa squad ahead of a series for the first time.

On Monday, the 26-year-old was named in a 15-man squad for the month-long tour of Sri Lanka starting in early July.

In the past, Abbott, who is Hampshire's leading bowler in the Championship with 26 wickets, has only ever been drafted into Test squads mid-series.

His two Tests to date were over a year apart.

"Although it's only been 14 months since I made my debut, I feel like I've grown immensely as a cricketer," he said.

"I think in the past eight weeks here at Hampshire I've grown as a person and a player and come of age as a bowler in a short space of time."