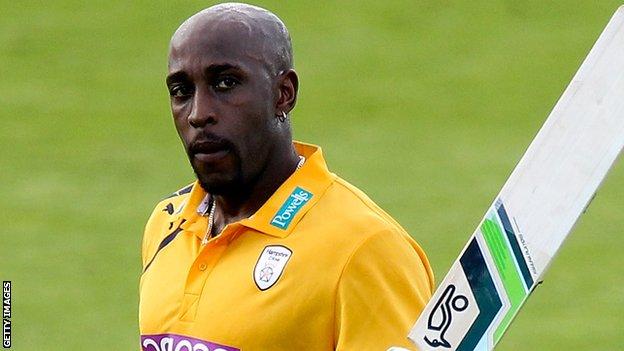 Jimmy Adams made 47 as the hosts finished their innings on 171-7, although Australian big-hitter Glenn Maxwell went for seven on his return.

Kent struggled to match the run rate despite the efforts of captain Rob Key, who was unbeaten on 89 from 63 balls.

Carberry had failed to make double figures in his last three limited-overs matches for county and country.

However, he hit two sixes and eight fours in his 58-ball knock before being bowled by Doug Bollinger in the 19th over - one of three wickets for the Australian at a cost of just 19 runs.

He and Adams added 66 in eight overs for the second wicket, but Maxwell went to the fourth delivery he faced after clearing the ropes once.

The all-rounder was one of six bowlers deployed to defend the hosts' total but was only given a single over as Key tried to keep Kent up with the required rate.

He and Northeast shared a stand of 89, but three wickets went down for 10 runs in the space of nine deliveries after the latter had fallen to Will Smith, and the task of scoring 42 off the last three overs proved beyond them.

Left-arm spinner Danny Briggs followed up his seven wickets in their Championship game against Derbyshire with an excellent spell of 3-28.