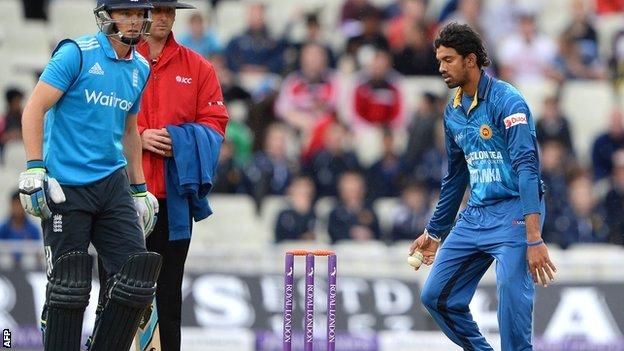 When Sri Lanka bowler Sachithra Senanayake ran out England's Jos Buttler by 'Mankading' him in Tuesday's decisive one-day international at Edgbaston, it was another example of a 'Spirit of the Game' issue which is terribly hard to define.

However, the fact I have never seen it happen before in all of the cricket I have played and watched since 1976 does demonstrate how hard the professional game works for it not to happen.

Club cricketers might have a slightly harder attitude to it, but England skipper Alastair Cook also admitted he had never seen it happen before.

To summarise what happened, Buttler was run out at the non-striker's end after straying out of his crease.

Senanayake says he had already warned Buttler at least once - there does seem to be some discrepancy about the number of warnings he had been given - and following the match, Sri Lanka skipper Angelo Mathews says his team also issued the player with a warning in the previous match at Lord's.

However, it served to create controversy and there was a hostility between the two teams when they shook hands at the end of an entertaining and hard-fought series.

I don't think I've ever seen Alastair Cook so angry. He was careful with what he said - and rightly so because legally Buttler was out - but with a two-Test series coming up, memories tend to be long.

To avoid any more incidents like this, I would rather see such decisions taken out of the hands of the bowler - and I think that's something the International Cricket Council should look at.

A bowler should be allowed to point out to an umpire that a batsman is backing up, leaving the officials to watch what is going on. If, in the umpire's opinion, a batsman is trying to steal an extra run - and I strongly believe Tuesday's incident was not an example of a batsman trying to steal a run - then he gets a clear and obvious warning, like a bowler would for running down the pitch.

'Mankading' - named in honour of Mulvantrai Mankad - is when a bowler runs out a batsman who is backing up out of his crease.

A right-handed opening batsman and orthodox slow left-arm bowler, "Vinoo" Mankad played 44 Tests for India between 1946 and 1959, but none were more controversial than in Sydney in 1947 when he ran out Aussie opener Bill Brown at the non-striker's end, having previously warned him for backing up too far. The tactic became known as a 'Mankad'.

If the batsman did it again, I would apply a five-run penalty. That would take the heat out of it all straight away.

There is a down side to this suggestion because, with all these television replays about a fielding side might point something out and ask for five penalty runs to be applied, but I think it's better than this current situation.

What was slightly telling for me was that Senanayake was the only Sri Lankan player or member of the team management not to come down and shake the hands of the England players after the game. He stayed in the dressing room until England had returned to theirs, and only then did he come out and celebrate a 3-2 series win with his team-mates. Read into that what you like.

What I will say in balance is that Joe Root stood his ground when he knew full well he had been caught behind by Kumar Sangakkara off a huge glove.

He decided to stand there and hope he got away with it, eventually being given out following a successful Sri Lanka review. It's difficult to take the moral high-ground on a spirit of the game issue when your team has done that just a couple of hours earlier.

The Sri Lankans might have been justifiably miffed to see Root stand there for that, and these things can carry on during the rest of the game. That might have happened with the run out.

I hope that any ill-feeling between the two teams is quickly resolved because we have a fascinating two-Test series ahead of us, with England naming their squad on Thursday.

It's one of the most exciting and unpredictable squad selections for a long time, and I'm looking forward to it.